Warning: This recap will contain spoilers for the January 25 episode of The Magicians.

Lev Grossman's best-selling series of books has been adapted for television by Syfy, which is making great strides to diversify their lineup. The Magicians follows Brakebills University, a secret institution specializing in magic. Quentin Coldwater quickly finds himself as a student at the university with his friend, Julia, being rejected but pursuing magic on her own.

The story kicks off with the age-old tale of young, attractive 20-somethings trying to figure out their lives, while living the partying dream in their off-hours. Quentin is off to a grad school interview but spots a clock from a work of fiction he loves, Fillory and Further, which slowly leads him down the road to Brakebills. Quentin's obsession with the novels are a driving point of the opening part of the episode and not just something that's a throw-away character trait, as it plays into the larger world later on.

The opening moments of the show, with Quentin and Julia partying, are really tough to get through and play more like a bad teen drama over anything else. It's heavy-handed and very angsty. There is some steady character development for Julia and Quentin her, but it's a bit of a rocky start. Luckily, when the story kicks in, things get exceptionally more interesting and intriguing. Quentin and Julia find themselves at Brakebills University and taking a test, without really knowing how they got there. The scenes are quick and confusing and give the audience the same sense of confusion the characters are feeling.

Much like Harry Potter, which viewers will draw a lot of comparisons to, Quentin quickly discovers magic is real and he has the ability to use it. The kicker is that this is all somehow tied to the book The Magicians, which Quentin loves and is incredibly familiar with. What separates this show from the Harry Potter franchise is that it does deal with more adult themes as well as developing what magic is in this universe. It's not as simple as pointing a wand and yelling out something in Latin.

The real turning point comes from a conversation Julia and Quentin have outside of a bar where Julia reveals she's been learning magic on her own, which Quentin seems to thing is a bad idea. Julia meets another magic user during this time. It's pretty obvious this is where the story is headed and it's a nice transition. It'll give the viewer something to attach to.

The real kicker from the pilot episode comes from the final scenes, which has Quentin and his classmates sitting in their class. Time freezes and a man covered in moths comes in, rips someone's eyes out and approaches Quentin. This is the moment that sets this show apart from other magic-using films and television. It's extremely dark and doesn't hold back the punches. This scene provides a great element of horror without downplaying any of the horror aspects the show is presenting.

Overall, the first episode of The Magicians has a real rough start, and tonally, doesn't show the audience what it's supposed to be offering. It can be tough to get through. However, the final half of this episode delivers suspense, horror, and mystery precisely the way it should. We also get to see the numerous paths this show is headed down, whether it's Julia practice magic on her own or this "Mothman" character who can stop time. There's a lot of interesting developments to keep the audience invested.

On the surface, it's easy to call this "College Harry Potter," but there's enough in this first episode to really set it apart, story-wise and tone-wise. This is something more adult and a bit darker. It feels like Syfy has another hit on their hands. 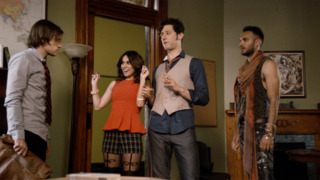