The Fox #1 - Freak Magnet, Part One: The True Face of MyFace; A Picture Lasts Longer

A classic Red Circle crimefighter gets a new beginning, but stays true to its Golden Age roots.

THE FOX conjures up a very Golden Age feeling -- retro-styled visuals, plenty of action, and a wild, kooky villain. Haspiel and Waid have brought the classic Red Circle Fox back, and done it with great respect for the genre.

Conceptually, The Fox has a pretty good thing going on -- putting on the suit to make things interesting, then relying on the suit when they get too interesting -- and it's a neat interpretation of the costumed-but-not-powered-hero. I like the honesty of The Fox's nature, and I like that he isn't invulnerable -- seeing him take a beating from powered villains or street thugs is endearing and makes me want to root for him.

The issue's primary villain is excellent; her duality is completely unsubtle, and Haspiel isn't afraid to ugly her up (and give her a classically cheesy villain name, too!). It's refreshing to see a villain who's clearly evil, but not in an overly-gritty way. THE FOX doesn't short on action or intrigue, but remains appropriate for a wide range of readers by keeping most of the violence on the lighter side (punches and headlocks versus evisceration or worse).

Bonus: there are two separate stories packed into this issue, and the second (backup?) is a charming love letter to the Polaroid that reveals a bit about Paul's roots as a photojournalist.

I like The Fox. I'm not really connecting to Paul. Naturally, our focus is on the titular hero, but his civilian alter ego is a little bit too inconsistent for my tastes. Even allowing for some intentional weirdness when he's in Lucy's radius, I can't really pin down what Paul's personality is supposed to be.

The inclusion of a social network feels a bit token to me. Everything else in the issue seems delightfully timeless, but Lucy's M.O. seems to say "hey, look! it's 2013!" It's not a deal breaker, but it got a little side-eye from me.

THE FOX feels timeless, and its clean, neo-noir story and styling are just right for a Red Circle revival. Pairing a regular-guy-hero with a classically over-the-top villain is a great start, and it's done in a manner that's friendly to a wide audience (perhaps not small children, but it's appropriate for younger readers in ways that many mainstream superhero books aren't). Haspiel and Waid have also teased an upcoming villain that feels Cold War classic, hopefully suggesting their intention to preserve the retro feel of the series. 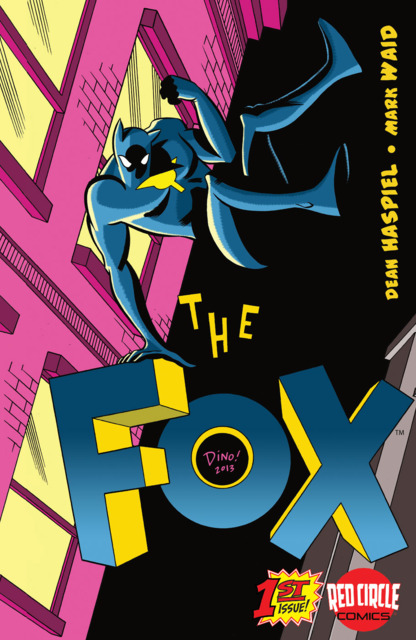