The Flintstones #1 - A Clean Slate

Get ready to "meet the Flintstones" all over again.

With the relaunch of the Hanna-Barbera characters, DC Comics has two options--they can try to recreate what we've seen in animated series or they can try something a little different. The latter is the case with The Flintstones.

In an interesting decision, Mark Russell took on the writing duties for the relaunch series despite not having been a huge fan of the show. In some ways, this could be a brilliant way to go, especially if the idea is to try to keep the vibe of the book different from the cartoon. Russell is able to take the characters and shape them in a slightly different fashion instead of trying to just recapture the essence of who they're supposed to be. You can immediately recognize who everyone is, but it's not just copying what we've seen over and over.

At the same time, as a fairly big Flintstones fan myself, I found the reinterpretation fascinating. While I would never have a problem sitting down and watching an old episode, I'm not sure if I'd want to read a comic version of the old series. What Russell is giving us here absolutely captures my attention.

Seeing the Flintstones characters in this fashion may take a little getting used to for some. It probably would help to have a connection or interest to the past shows in order to fully appreciate what is being accomplished here. The first issue is a really good set up for a new take on Bedrock.

Whether you were a hardcore Flintstones fan or a casual viewer, there is a lot to enjoy here. Mark Russell's new take on the characters is intriguing. Along with Steve Pugh's art and Chris Chuckry's colors, this is definitely the Flintstones in a way you haven't seen before. A lot of the essence of the animated series has been captured, yet the characters all have a fresh feel to them. As long as you can handle the reinterpretation, you will have a fun time reading this book. Chances are you've grown since you were first introduced to the characters. Russell and DC have allowed the characters and tone of the book to grow along with you. This book is absolutely worth checking out. 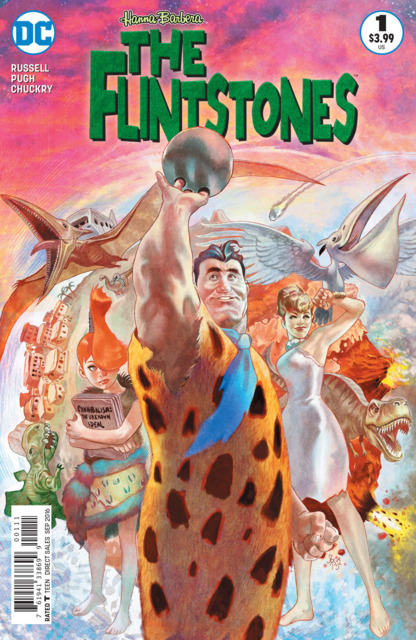