The Trickster has broken out of Iron Heights! Time for killer dreidels!

Warning: Spoilers ahead for tonight's episode.

On this week's episode of The Flash, back on Earth-Two, Wells tries to kill Zoom, but Zoom is too quick. Wells wants Zoom to kill him, but Zoom won't do it. Zoom does say "Merry Christmas" though.

Iris talks to Barry and she starts breaking down. Iris says she doesn't want to trust her mother and tells Barry that she has a brother, Wally. Barry says they can tell Joe together about Wally.

Ted and Caitlin are talking/flirting and Cisco comes in. Jay jokingly says he doesn't know what Christmas is. Caitlin invites Ted to the Christmas party. Over at Iron Heights Prison, it's snowing really hard. Weather Wizard breaks in and takes out a few guards and starts letting rogues out, Captain Cold first, followed by Trickster. Weather Wizard wants to kill the Flash. He says Flash is weak.

Cisco figures out a way to figure out how to find Weather Wizard. It's the wand Cisco created in the alternate timeline. Iris and Barry tell Joe about Francine and Wally. Joe is very emotional. He needs time to process everything. Barry and Iris get home and Snart is there, alone. Snart tells Barry that he and the others were broken out of prison to kill Barry. Snart won't tell them where they are.

Joe and Barry talk at STAR Labs. Joe blames himself for Wally not having a father. Joe is emotional and Barry talks to him about how Joe was a father to him and Joe would have done the same thing for Wally.

Trickster appears on a television at Central City PD. He's on TVs everywhere in the city. He declares he wants Flash dead. Cisco looks for clues in the video. There's a reflection in Trickster's eyes and he's at a toy factory... a place where Joker normally hangs out. Flash gets there and Patty is always there. Dreidels with C4 spin around Flash and Patty. Flash spins his arms around and takes Patty out of there as the place blows up. Patty explains that her ditching out on her father is what got her father killed by Weather Wizard.

At an ice rink, Trickster is pretending to be Santa Claus and handing out presents to the kids. At STAR Labs, Zoom comes through the portal and talks to Wells. Wells says he needs more time. He gets one more day to do something.

Flash rushes to a rooftop and Martin jumps off and flies away. Weather Wizard is on the loose and Barry goes after him. Flash catches up and Trickster sends a present his way. It's a box with a bomb in it. Barry pleads with Weather Wizard, but Martin says that if Flash doesn't move, they won't blow up the presents and the people. At STAR Labs, Wells comes up with a plan to get rid of the bombs. Meanwhile, Weather Wizard beats down Flash, while Wells, Cisco, and Jay put their plan into action. The bombs are taken care of and Flash beats the bad guys.

Patty shows up and pulls a gun on a downed Martin. She doesn't end up doing it after Flash talks her down. Barry talks to Joe and they apparently met up. Joe says Wally doesn't know about him yet, but it will come. Joe gives Barry his watch and says, "I've always said, one day I'll give this to my son." Barry puts on the watch and looks at Wells through a place of glass. Barry says towards him that he hates him for what Wells (Thawne) did to him but he doesn't want to hate him anymore. Barry forgives him. Barry invites him out, but Wells says he can't celebrate without his daughter.

Christmas party at the West household. Patty shows up and says she wants to talk. There's a knock on the door and Joe answers. It's Wally! Joe invites him in.

Endcap: Wells shows up at an outdoor breech and Zoom appears. Wells says he knows why Zoom keeps sending villains. He wants Barry to get faster and more powerful in order to drain his powers. Wells says he'll do it at the end of the episode, steal the Flash's speed, after seeing his daughter.

Wally is finally here! While we only get to see Wally West for a few seconds at the end of the episode, a lot of the episode builds on Joe and Iris realizing that Wally exists. It's some incredibly emotional scenes and both Candice Patton (Iris West) and Jesse Martin (Joe West) nail these scenes. It's some of the best performances of the season.

Leonard Snart also gets some screentime as well, and there was a problem with the idea that he just felt like he was broken out of jail just to be on Legends of Tomorrow, but we get some more characterization from him here as he's willing to give Barry information about what Trickster and Weather Wizard are up to. He may be a villain, but it seems like he can be redeemed. That's something we'll probably see more of in the new CW series.

The villain of the week aspect was fun as we got to see Weather Wizard and Trickster work together in order to try and kill Flash. While it's great to see Mark Hamill take on the Trickster, it felt very much like we were just seeing the Joker here. Regardless, the character is sadistic, something we're not used to seeing from Flash's rogues.

On the flip side, the story with Wells and Zoom grows here and we're finally seeing what role Wells plays in all of this and what Zoom wants with Flash. It's a pretty crazy turn since the audience has spent so much time learning to trust this character again and in the end, he's still planning on turning on Barry, but this time, it's to get his daughter back.

One thing that's been really cool about this season, which continues here, is the fact Flash is becoming an icon in Central City. He has his own lattes and his own action figures. This is actually a really important part of the character in the comics, as he's one of the few superheroes in the DCU that's really held up as a hero and worshiped as one as well. It's a quick moment in the opening of the episode, but it's still cool to see that built up over time.

Overall, the story with Iris and Joe are the highlights of the episode. We get some great, emotional scenes here that really build to those final moments where we finally get to see Wally West. There's also some great moments with Patty and the Flash as well. The actual story with Trickster and Weather Wizard was a bit of a miss. It was fun but didn't feel like it fit with everything else here. It was a solid mid-season finale or winter break episode, whatever you want to call it. This season continues to be a pretty fantastic run, but I'm really intrigued to see where this is all going next with Zoom. 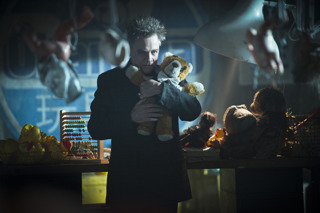