The Flash #201 - The Man Who Saved Central City

Spoiler-free early review for the first episode of the second season.

We have a spoiler-filled post-mortem right HERE!

The Flash is back. When we left off last season, Central City was about to be destroyed by the Singularity event. We were left hanging all these months, wondering how Barry was going to save the city. The season starts out with a bit of confusion as it appears everything is back to normal. What we find out is time has passed. Things have changed and life in Central City is far from perfect.

Normally when we have a show filled with a large ensemble cast, there's sometimes a feeling of clutter. That isn't the case in this episode. Because of the events of the Singularity, Barry has decided to separate himself from his former allies. They're still on speaking terms but the actors do a superb job playing off each other in this new situation. You can feel the tension and suffering they're going through. As the story progresses, we start to see the bigger picture and discover what happened.

For a show that's built around the superhero lore, a lot of the enjoyment does come from the characters and their personalities and their relationships with each other. Seeing characters like Cisco and Joe spend more time together is pretty great.

Another aspect where the show changes is Flash has become a bigger presence in the city. You can imagine with a gigantic event like the Singularity occurring, if people didn't know about the Flash before, they sure do now.

There may be some wanting to celebrate the fact that not everyone has been completely wiped off the face of the planet, it's not like Barry will be making plans to party. Not only was there some loss, we also have the debut of Atom Smasher.

The effects used for Atom Smasher vary. Overall, he makes a great new foe for Flash to deal with. It's just too bad he feels he needs to take him on on his own.

The show set a pretty high bar with the first season finale. The second season premiere continues to maintain the level of excitement and emotion we've come to expect. The action is mixed throughout at different levels but what will knock you off your feet is the emotions thrown in your face. Life isn't perfect and having superpowers doesn't guarantee a perfect life either. You'll be happy and sad at different moments. This is what pushes the show forward.

As we find out everything that's happened since the first season finale along with the repercussions of those events, you can see how ambitious the show is. It feels like a lot has happened with the characters over the course of one season and you have to admire the risks the showrunners are willing to take. And since this is the first episode of the season, you can bet there'll be some interesting twists and set up for what's coming in the next episode.

Giving viewers flashy special effects (no pun intended) will only get you so far. It's the story and the characters that make you want to come back for more. The Flash is off to a fantastic start. 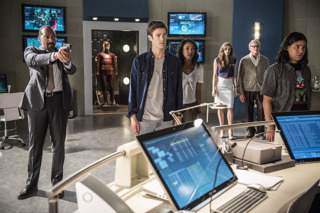