It's time to say hello as we meet a new/old character. And we find out more about Future Flash.

The moment many have been waiting for is finally here. The first meeting between Barry Allen and Wally West. With last week's THE FLASH #30, we got our first glimpse at the New 52 version of Wally. Many were upset simply based on his physical changes. This is where we start to see who he is.

In the present day part of the story, we get to see Barry doing his day job. This is one aspect that's always been of interest. He may be a superhero and member of the Justice League, but as Barry Allen, he still has a job to do.

With the introduction of Wally West, we also get some interaction with Iris West. This carries into the "twenty years from now" future where, if you read THE FLASH #30, something bad happens to a certain character. It's not too hard to figure out that Future Flash has to do something to try to fix things. This leads to a fight with Grodd. Drawn by Brett Booth, the future scenes are fantastic. I'm definitely intrigued by the future costume and can't wait to see more.

It's going to take some time to get used to the new Wally West. Even my ten-year-old daughter was a little confused knowing him from just the Young Justice animated series. It's expected that long-time readers will have some frustration but characters shouldn't be simply based on physical appearances. We still need to wait to see what his actual personality will be like. The choice in his age is interesting. Hopefully readers can keep an open mind as we take the journey in discovering who he is in the New 52.

Seeing Barry at the police precinct is great but Director Singh is feeling a bit too much like J. Jonah Jameson. It feels like he's only here to yell at Barry.

Having two artists on an issue is always a concern for me. While we have two separate time periods, there is a pretty jarring difference between Brett Booth's future sequences and Ron Frenz's present day scenes. Frenz's art has a more...classic feel. Some of the characters' faces look a little off. There's always artist interpretation but Iris West didn't look right.

There are some changes coming to Flash's world. With the New 52 introduction of Wally West, we are starting to see the beginning of the next chapter for Barry Allen. With a glimpse into the future, we know things get bad but it'll be up to Future Flash to try to fix things. Robert Venditti and Van Jensen are laying out the groundwork for some crazy things. The art is split between Brett Booth and Ron Frenz. The contrast between the two art styles is a little jarring but it does separate the feel of the two time periods. Fans should be patient as we find out who Wally West will be in the New 52. This is the opportunity to tell new stories instead of repeating past ones. 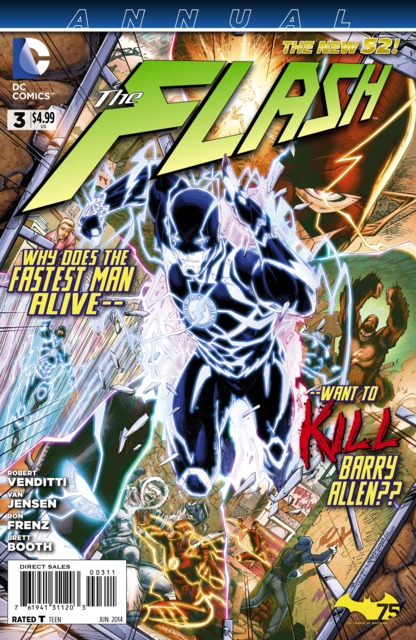