Barry teams up with a friend to take on Godspeed.

Flash enlists the help of Wally West to help bring down Godspeed, who has no problem with killing criminals, instead of getting them a fair trial. Can these two take down Godspeed and can the other speedsters help?

At times, it feels like this whole story exists to move Wally West forward as Kid Flash. Writer Josh Williamson and artist Carmine Di Giandomenico deliver an entertaining story, but more cynical folks may find this part of the story a bit forced to fit in with the bigger picture. We're getting inside of the head of the character. Wally is being developed well here. We're finally going to get to see him as a hero, which fans have been looking forward to since he first appeared in the New 52. Hopefully, this continues to be a slower build, so we're just not seeing him in costume in the next issue, but either way, it will make fans happy.

Regardless of the idea that this part of the story feels forced, the whole problem with the multiple speeders is solved. It's a quick reset button, but it works in the grand scheme of things. The speedsters are gone, and it's done so in a way that Barry can take on Godspeed, who is faster than him.

Where the issue really shines is with Godspeed. He wants to make the city a better place, but he's doing it in a way that's against everything Barry stands for. Godspeed has no problems killing off the bad guys. Barry wants to bring them justice. Godspeed isn't delusional or crazy. He's misguided, but he makes a fair point, over and over again. They wouldn't be in the overall mess they're in, with crime and the Rogues, etc, if Barry killed off those who broke the law. That's where the story is moving towards, and it's a really nice hook to keep readers coming back.

Di Giandomenico and colorist Ivan Plascencia do a nice job on the issue. This artistic team has really put their own stamp on the series and character, giving it a unique flavor. Di Giandomenico's exaggerated style fits well within a series about people running at incredible speeds. As always, Plascencia's colorwork gives the overall issue an eerie tone, which is a bit fitting for the story with Godspeed. He's an amazing colorist, and it's wonderful to see him on this series.

Flash #6 is a really solid issue that opens the door for the rest of the arc. While the last issue had many readers with their jaws hitting the floor in shock, this issue moves forward rather than lingering on that moment. A few things are wrapped up nicely, but it may feel like the Wally West portion of the issue is a bit forced. Regardless, this is a solid issue building towards what could be a great next issue. 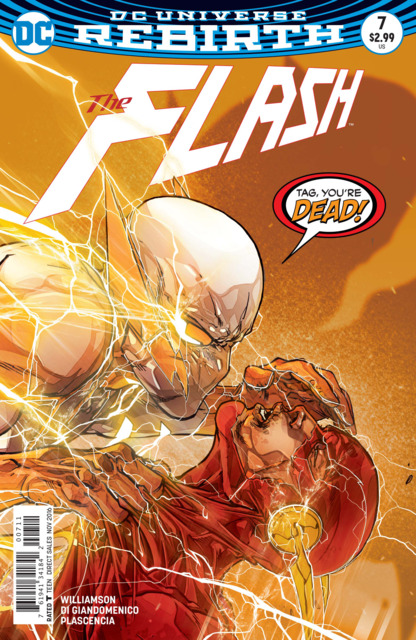