Can Flash escape the Speed Force and make it home?

Everything wraps up here in spectacular fashion. THE FLASH goes back to the status quo, in a sense. There's still lots of possibilities for things to change and a lot of doors that could easily swing back open, although they appear to be closed. Is that vague enough for you?

Before even stepping into the madness of this story, penciller Brett Booth, inker Norm Rapmund, and colorist Andrew Dalhouse deserve a round of applause for their work on this book and this issue. FLASH is a book that has to show movement and an artist who is a bit stiff can destroy the momentum of the book. Booth keeps the characters, story, and panel composition completely fluid and gives this book such a smooth pace. It's also a nice addition that his art, along with the inks and colors, are seamless and beautiful. This is a book you could buy for the art alone, but luckily, you'll be treated to a pretty solid story as well.

While the part of the story that had Barry in the savage world of the Speed Force fell a bit short for me, as a whole, throughout this book, it concluded in spectacular fashion. Honestly, it was the one part of the book I wasn't looking forward to, but the way Van Jensen and Robert Venditti wrapped it up was phenomenal. In addition, we get this sweet reveal page that is going to lead to some great things. At this point, FLASH fans should be really pumped that Venditti, Jensen, and Booth are going to continue forward on this title, post-CONVERGENCE.

The book is filled with a ton of action and while FLASH, like every other DC book right now, is forced to wrap up their stories this month, to prepare for CONVERGENCE, this is really the most natural conclusion of a book to date. It really feels like this is where it should end and it wasn't cut short, which is actually a really refreshing thing.

I think future Barry is still around or in the Speed Force world, but I can come off like a crazy conspiracy theorist at times.

The North by Northwest variant cover, by Bill Sienkiewicz, is my favorite cover of the week. Not only is it a great homage, but it also works as with Barry Allen in Cary Grant's place.

The whole Speed Force storyline never really grabbed me. It didn't really have the same impact, plot wise, that the future-Barry story has. Running the story like this, with two antagonists in separate universes, takes away from the overall focus. All-in-all, it delivers a great story, but splitting the two up felt like it distracted a bit from the purpose of the book.

I was incredibly surprised with how well this final issue turned out, considering so many stories feel a bit rushed this month because of CONVERGENCE. The art is downright stunning here and while the speed force world story wasn't my favorite thing to come out of this book, the impact it had on the overall arc and the finale was wonderful. The creative team on this book is doing some awesome things and I cannot wait to see what they have planned after the upcoming DC event. 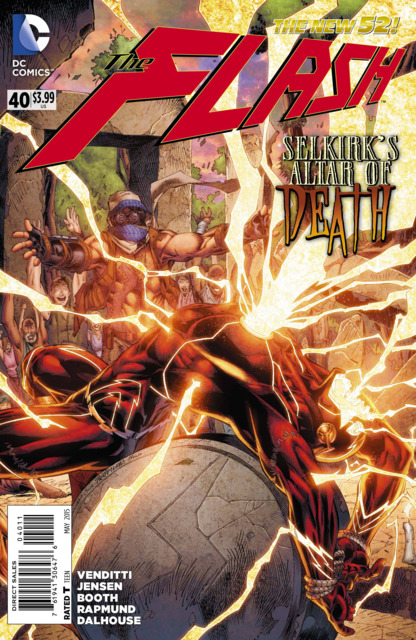