The unlikely team of ladies team up with a Goddess and embark on a search for a missing Valkyrie.

Will Sliney's art is pretty great throughout the issue as a whole, but it stands out the most during the flashbacks where Hela, Queen of the Dead, begins to reveal a brief history of the Doom Maidens: who they are and what their ultimate purpose is. The colors on these pages is far more subtle than the rest of the issue, and the result really gives Sliney's pencils that extra kick. The panels are gorgeous and left me wishing the entire issue could look like these couple of panels.

The thing about this series that is great is the fact that it has this really funny way of taking these very different characters and merging elements of the supernatural and improbable with concepts and characters that are grounded in reality. The series has all the ingredients for a story that probably shouldn't work, but for the most part, it does. Writer Cullen Bunn merges concepts that are definitely impossible with those that are kind of, sort of possible by interjecting moments where the characters are in complete disbelief. The panel where Annabelle Riggs discovers she has become a Shield Maiden is a good example of that. The scene provides humor and a nod at the improbability of something like this actually happening, and it works.

Caroline le Fey has the potential to be a more fascinating villain character, but right now she's being written in a way that is really cliche -- sort of like that cliche moustache twirling type evil character, except in this case its minus the moustache. She is usually seated and shrouded in darkness, readers can never actually see her face. The artist and writer use techniques we've seen countless times and that sort of takes away from the potential of le Fey as the story's villain. Because we've seen this all before at one point or another (many, many times), the villain feels a little bit less threatening as a character.

One of the things that makes reading this issue great is Bunn's dialogue. There are some great scenes shared by Hippolyta and Valkyrie where both claim their respective heritages to be the better of the two, and these scenes are fun. The story progresses and feels a bit cliche at moments (particularly the scenes featuring the story's villain), but overall it's a fun issue with a pretty crazy cliff-hanger at the very end. Bunn has put together an interesting team and this issue is considerably better than issue #2. I for one am definitely looking forward to the continuation of this series. 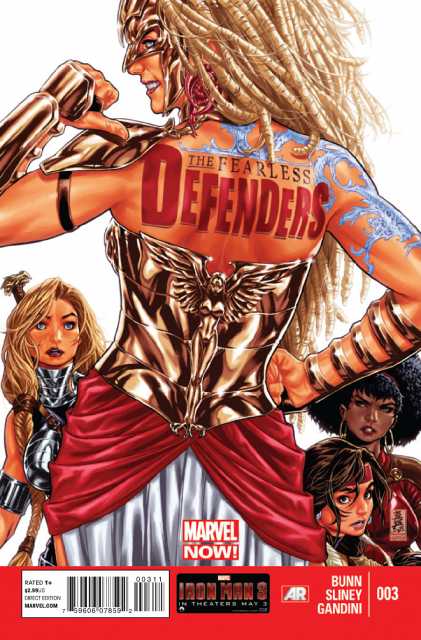