Secrets, lies, and a starlet's funeral.

THE FADE OUT is one of those reads to settle into slowly, savoring for its strong, steady pacing and smart conceit. We've only just started the reel, having happened upon a body and a mystery last issue, and there's still much to learn about the cast, their histories, and that beautiful, rotten town. If there's any urgency, it's rooted in studio woes -- contrasting the slow burn of a crime story that few of the characters seem in a rush to solve.

It's that muddle of cover-up and general disinterest that makes the murder so intriguing; what exactly are the stakes, and how far will we have to dig to find out who's behind this? It's especially interesting to see the detective work fall into the hands of a blocked-up writer with too many secrets of his own. Charlie is determined, but entrenched; he's hardly objective, and he's got so much to hide that he's checking his own tracks as much as he's following up on Valeria's killer.

That alone would make for a great set-up, but the delivery is layered and smart, culminating in a pitch-perfect moment in the costume trailer. There's so much to praise about the execution of this book, but I think the blend of nuance and in-your-face imagery is what really sets it apart.

This is a gorgeous book, with pages that are appropriately cinematic for its Hollywoodland setting. Well-chosen camera angles, heavy shadows, and broad, muted swaths of color give the book a period noir feel and heighten its visual drama. Breitweiser's colors are stylized and evocative, and pair perfectly with Phillips' linework. Words and images are balanced just-so, with the art team bearing a lot of responsibility for the book's subtle emotional moments.

I've come to expect high-quality backmatter on certain books, and it looks like THE FADE OUT makes that list; this month's issue features a piece on Fatty Arbuckle by Jess Nevins. It's a fascinating peek at a classic Hollywood scandal that's both educational and complementary to the issue.

I adore Sean Phillips' illustrations, but some of the dramatic shadows make it hard to sort out who's who. I'm glad that Charlie has glasses and that the director and studio head have distinct looks, but I'm getting occasional face-blindness on any other male characters with brown hair.

THE FADE OUT continues to be an example of Brubaker and Phillips doing what they do best -- telling a timeless crime story smartly and deliberately. 1940s Hollywood drips with glamour, grit, and the overwhelming sense that everyone is deeply flawed and selfish; it's an incredible setting for a masterfully-executed story. 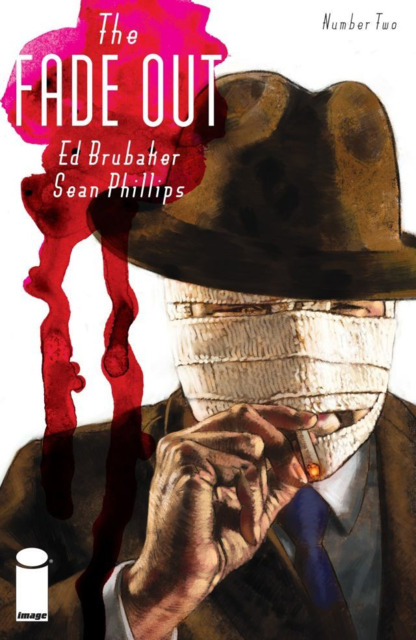