Can the future be changed? Has it already been changed or could it get worse?

Joshua Hale Fialkov's THE BUNKER is getting deeper and deeper. We've seen the letters from the future and the modern day cast has to figure out what to do. They've been told they're responsible for basically messing up the world, big time. With the knowledge they have, they could try to change things but what if that makes things worse? This is the lovely dilemma in time travel.

As they try to figure things out, Old Grady (from the future) is going about trying to push them into what he says needs to be done. The rest have no idea whether or not to trust him. With the flashbacks...or flashforwards, we see more on what Grady did before venturing into his past (which is really the present). And it turns out there's another bit added to the story that Grady hasn't felt the need to reveal.

THE BUNKER might sound sort of like some types of stories you may have seen but Fialkov is really adding a different twist to things. Jumping back and forth from the present to the future is keeping us on our toes. If you haven't been keeping up, Oni Press released the trade paperback with the first four issues today as well.

And then there's Joe Infurnari's art and colors. His style is fresh and adds to the feel of the chaos going on in the story. There is a mix of beauty and eeriness that really separates the look of this book from other comics.

The only bad thing is the sinking feeling you get in your gut as you read the story. You'll want to know how it's all going to turn out but you'll also be a little afraid that things might get worse for the characters.

THE BUNKER is simply a treat to read. Joshua Hale Fialkov and Joe Infurnari are creating a story that is more of an experience. Fialkov keeps things moving and throws twists at you that you won't see coming and Infurnari's art is a wonder. The trade collecting the first four issue has also been released so do yourself a favor and make sure you're reading this series. 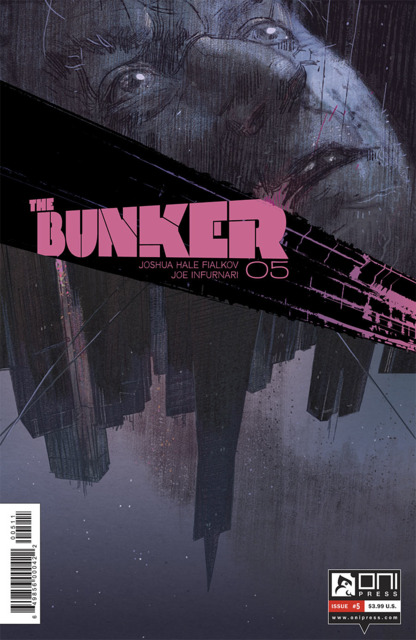