Hettinger is no longer the hero cop. He's now the Black Hood

Greg Hettinger has become the Black Hood on accident. However, in order to feed his addiction to drugs, Hettinger does things a little differently than the law requires and ends up in a very bad situation.

THE BLACK HOOD #2 continues to develop Hettinger and the changes he's gone through, since he took a shotgun blast to the face. The character between issue #1 and #2 is night and day. He's not accepting awards here or shaking hands. He's trying to find his next hit to dull the pain and he goes about getting the drugs in a brutal way.

One of these scene is pretty fantastic though. Hettinger, in his officer uniform, busts into an apartment where a drug deal is happening and shoots two of the three men down. It's almost like we're seeing a man on his final rope, doing anything he can to get his next score. It's desperation but extremely planned desperation, as he practices saying "Freeze. This is a bust" in the mirror prior to going into the apartment.

This issue leaves readers off at a very weird place. We won't get too into the details here, but Hettinger ends up being arrested at the end of the issue. The book has established what it is and where it's going and then potentially throws all of that away to change direction. Duane Swierczynski is giving the readers something pretty awesome as far as the story goes and the ending is incredibly gripping.

Michael Gaydos provides some gritty art that truly gives this book the look and tone is deserves. Aside from that, it's almost a reflection of everything Hettinger is going through. Aside from the art itself, the panels and pages are extremely interesting because it's not all flat and straight. The panels look quickly hand-drawn, which just adds to the look and feel of the book in a really positive way.

The roughest part of this book is it's really hard to root for the good guy since Hettinger is not a good guy at all. Sure, he's the main protagonist here and there's reasons to really sympathize for the character, but if you're looking for a book where the main character is someone you can truly get behind, this may not be the book for you.

This book is something different in all the best ways. It's following its own path and telling the story of a man who essentially fell from grace. It's dark and gritty, and gorgeous. Swierczynski and Gaydos deliver an engaging story from start to finish and leave readers off at a very interesting place that completely changes where we thought the book was going. It's only the second issue as well, so I highly recommend checking this series out from Dark Circle Comics. 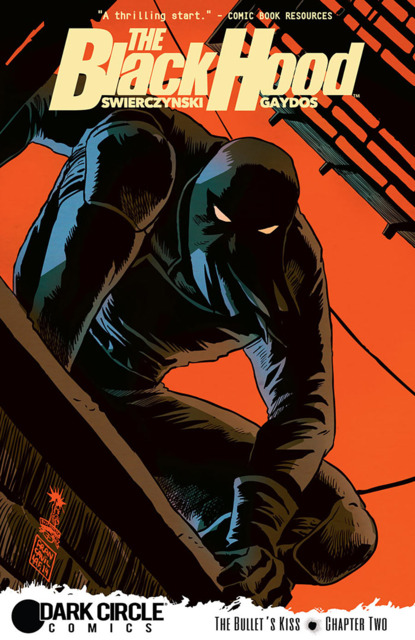