The latest issue of this series serves as the finale to this four part arc, and if you like noir themes, it is well worth picking up.

When you open up to the first page of THE BLACK BEETLE #4 you'll notice it reads like film noir -- and it's fantastic. There's a lot of momentum in this issue early on, and it starts off as a rather easy read even though it is the final of a four part story.

Francavilla's characterization of his creator owned Black Beetle character might remind you of characters you would have read in old pulp fiction novels or on radio show broadcasts from the 1930's, and it isn't just his art that relays that theme, it's the language in the dialogue he uses as well. Overall it's just incredibly well done, and it hooks you from the very start. The issue starts with four little words, "tonight is the night," which is enough to prey on any reader's level of curiosity.

Halfway through the issue the Black Beetle breaks down the events that have taken place in the story and how he was able to deduce the identity of his mysterious enemy. Although the dialogue falters a little bit in this scene, the panel layout is just so absolutely stunning. Francavilla organizes these few pages like pieces of a puzzle put together, and it is beautifully executed.

Francavilla utilizes a campy (yet clever) plot device when the Black Beetle lures the villain in this story to explain his step by step process of what exactly happened: this allows him to buy a bit more time. It's a tactic that may be a bit overdone, but it works with this issue and this story because of the themes present.

There were some moments where, like I mentioned above, the story had some dialogue that felt a little bit weak or forced, but the art goes above and beyond making up for that.

If this fourth issue is your initial journey into the Black Beetle's universe you might be a little bit lost as this issue ends not only this story arc, but it also places the series on a brief hiatus until the fall. If you're familiar with the characters and have read the previous four issues you will feel considerably more rewarded by the events that unfold in this issues' epilogue. There is a return of a certain character that will leave long-time followers of this story not only in suspense, but in anticipation of the series' resurgence in the fall. If you haven't been following, you'll still feel that same sort of suspense, and the events that unfold may very likely make you look back at the previous few issues of this story.

In the end, this is a solid issue and finale to the series. Chances are you will be very interested and excited in what's to come. The art is beautiful and the dialogue is fun, even if it is a little bit weak in some parts. Overall though Francavilla writes a very interesting story that will surely grasp the attention of readers from the get-go and only leave them more enthralled and intrigued as the issue progresses. 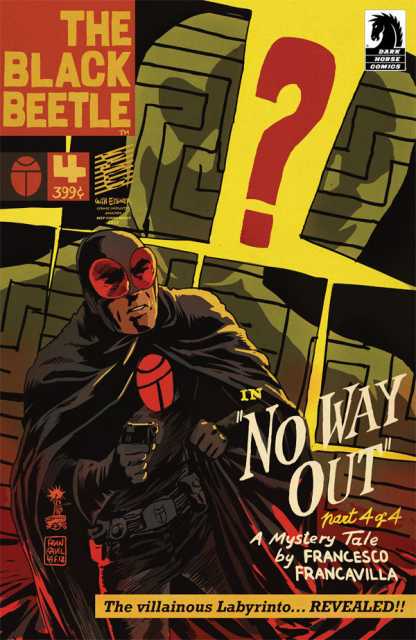