There's a new hero in town and there's more to him than you realize. Find out exactly who is the Black Bat.

With a new comic universe being introduced, there's a lot that needs to be set up and established. In a sense, we're being dropped right in the middle of an existing world. From the very first page, you know exactly what you need to know in getting a feel for this city. It's a grim and dirty city, likely with corruption flowing underneath the surface. Then once you turn the page, you immediately know what sort of hero Black Bat is. He is on a mission and will not back away when the odds are stacked against him.

What is his motivation? Once it's established that he is apparently a costumed vigilante, we start to find out more about what drives him. Through a mix of narration and flashbacks in the midst of the action, we get the full story on Tony Quinn, a defense attorney willing to represent questionable clients in order to get paid. This is another factor that sets him apart from most heroes. He wasn't a perfect angel before his transformation into a hero. His standards may have been a little lower than some but he did still have some. Which is what lead to losing his eyes in a horrific way.

There is more to Black Bat than a victim seeking vengeance against those that wronged him. He's not working alone. After his disfigurement, he received some new eyes and training. His appearance is still a little jarring but this is what leads to the choosing of his new name. What makes the story even more compelling is we're not looking at a perfect new superhero. He's still figuring things out. Even the notion of being a "superhero" is questioned. That adds a bit of realism rather than make it feel like an average superhero comic.

The art and color fit perfectly for the story. There's a great mix of light and dark scenes that fits the action nicely. There's plenty of variation across the issue so it does feel as if the story isn't taking place in one singular moment. You can feel the scenes change and the time change from place to place.

While Black Bat isn't necessarily a superhero, he is a costumed vigilante. He has and should have a secret identity to worry about. It could just be because this is his first "mission" but he almost seems a little careless about it. Too many people knowing his identity could change or guide the tone of the series. It reminds me a little of some comic book movies where the secret identities are often left unprotected. Allies are important so we'll have to see just who will know his secret.

We often go on about trying something new. I have heard the occasional plea or complaint about wanting to read a series but confused over continuity or a vast number of previous stories. THE BLACK BAT is a way to start from the beginning. The character may have existed since the 1930s but Brian Buccellato has revitalized the character. You don't need to know anything before reading this issue in order to be up to speed. This is one of those comics you're thankful exists in its own comic universe. The word "superhero" is used as if it's something that doesn't really exist here. The fact that the way Black Bat operates isn't necessarily black or white gives a nice feel to the story. This is a character that wants to get the job done and isn't going to let others try to break him in order to prevent the accomplishment of his mission. The story has that pulp feel that's rooted inside the character but Buccellato easily brings the character to modern times. 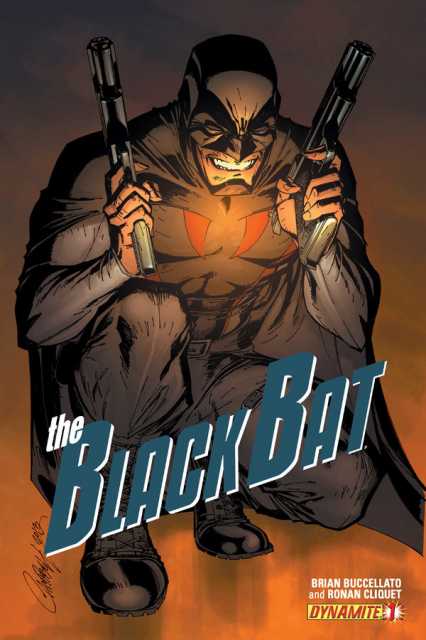