Ant-Man must work security at a local basketball game.

Ant-Man continues to juggle his family life, love life, and work life, all while the world around him gets pretty ridiculous. Also, comedian Paul Scheer makes an appearance.

What's been great about this series, and the last volume, pre-SECRET WARS, is the fact we're really getting to know Scott Lang. Everything opens up with his new relationship with Beetle, which we saw in ANT-MAN: LAST DAYS #1, during the Marvel event. We also have Scott's relationship with Darla, and the two were together at one time. However, this is more than a book about a character's exploits. It's about a character moving forward and working on relationships, whether they be romantic, for friendship, for business, or between family members. Nick Spencer explores all of these dynamics within this single issue. The second to last scene in the issue really works on the father/daughter relationship between Scott and Cassie.

The biggest problem with the issue is there isn't any building toward Power Broker and the Hench app. The reader can assume that the final pages between Giant Man and Unicorn have something to do with that, but there's not much of a connection. On top of that, the Paul Scheer stuff seemed a little too silly for the issue. Don't get me wrong, I love it, but it felt a bit out of place for the tone of the comic, which hasn't been this over-the-top comedic in the past.

Ramon Rosanas is really doing a stellar job on this series. On this issue, he's joined by colorist Wil Quintana. I can honestly say I like Quintana's colorwork a bit more than Jordan Boyd on this series. It feels a bit darker, all while keeping that flat look that Boyd did in previous issues. Quintana gives this a bit of a sinister feel. Rosanas continues to do well with facial expressions and matching them with the tones of each scene. To me, his art defines Ant-Man.

ASTONISHING ANT-MAN continues to be a fun and insightful series, giving readers a closer look at what makes Scott Lang tick on his journey towards redemption. The writing and art are top notch and I'm interested to see how this story builds and where its going. I highly recommend picking this series up. 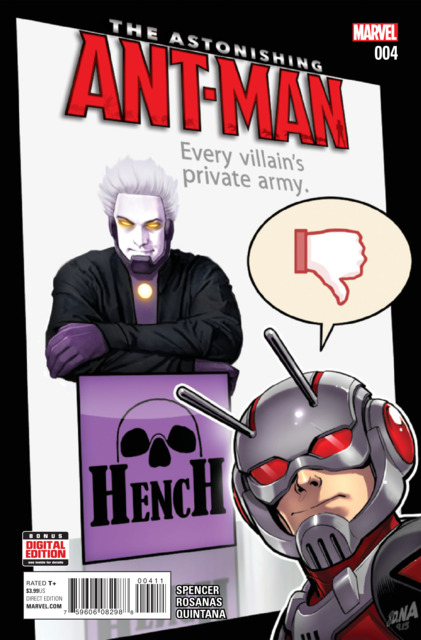