The Amazing Spider-Man #9 - Spider-Verse Part 1: The Gathering; The Feast

Spider-Verse is here. So are a whole bunch of Spider-People. Get ready for some craziness.

We've been seeing events leading up to this and it's finally here. Dan Slott and company are delivering more Spider-People than you could imagine. As we the issue starts off, we catch a strange glimpse at Peter Parker. Soon we see the hunt begin along with more information. It's been known that Morlun would be involved as one of the hunters, but we've been seeing, in EDGE OF SPIDER-VERSE, that Morlun has some family that's going to partake in the fun. As if Morlun wasn't bad enough, now there's going to be his siblings to deal with as well.

With the way this story has been building up the last couple months, Slott doesn't waste any time here. Once we have Peter and Silk together, they are soon joined by other Spider-Folk from their universe along with the appearance from some other familiar versions. You'll want to pause and savor each meeting as you ponder the implications of it all. Because Morlun and family are deadly vampiric killers, you'll also have that queasy feeling not knowing who will survive and who might be in danger.

Since this is just the beginning, of course we're still seeing the gathering of Spider-Men. That means we get to see Olivier Coipel's take on all these different versions of Spider-Man. As I mentioned before, you'll want to pause again to admire how fantastic the art is.

Some may have noticed the price but this is an oversized issue. The main story, with Coipel art, is 24 pages. There is also a 10-page back-up by Slott and Giuseppe Camuncoli. Camuncoli gives us glimpses at even more Spider-People. It's almost like playing a game to see if you can identify each of them.

My biggest problem is more of a personal one with the issue. I'm simply not a Morlun fan. I can appreciate the deadly factor he adds to the story. The big threat of him and his family is evident but I just don't care for him as a villain or character. The interactions between Morlun and his family are just the weak parts for me. I don't need to see so much of their bickering with each other.

I'm not sure how I feel about 616 Peter being the "greatest" of all the Spider-People. Seems too convenient.

This is a great first part of it all. Even though we're getting into the overall story, it's still just the first part. Things are being set up (in big ways). It's clear that action is going to heat up in big ways after this issue. Definitely something to look forward to. Hopefully the other versions won't be here just to be cannon fodder.

Spider-Verse is here! Dan Slott has already shown that this is not going to be a walk in the park for Spider-Man or the other versions. Dan Slott is cooking up quite the story and Olivier Coipel's art is amazing in the extended first part of the issue. We also get a back-up with art by Giuseppe Camuncoli. That gives a total of thirty-four pages for just a dollar more than the regular price. If you're a Spider-Man fan, you owe it to yourself to check out what all the excitement is about. Even if you don't like Spider-Man that much, chances are you'll find a version within that you do. Spider-Verse is definitely going to shake things up for Spider-Man's world. 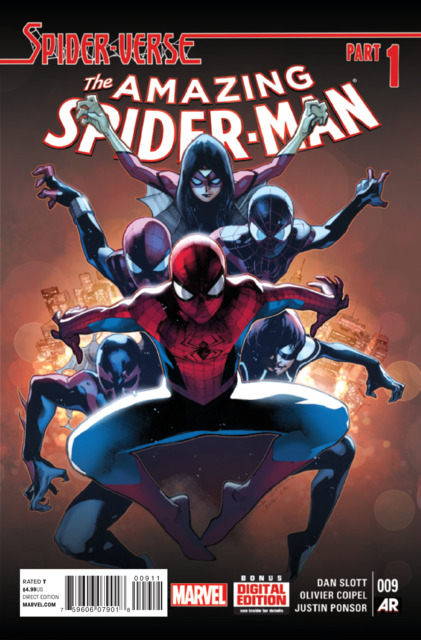