Black Cat and Electro continue their plans against Spider-Man and NYC. Plus more on the relationship between Silk and Spidey.

Peter Parker might be back in control of his body but there hasn't been any time to relax. Although, from some things that happen in this issue, it's not all entirely horrible for him. The main thing Peter has to deal with carrying over from when Doctor Octopus was in control is the transformation of Black Cat. Doc Ock defeated and humiliated Felicia Hardy. Having lost everything she's worked to build for herself, she has vowed to destroy Spider-Man, regardless of the reasoning and explanation he's given her. With Electro's powers on the verge of being out of control, he too has lost a lot. This has made it easy for Black Cat to convince him to join her crusade. Now Black Cat is making her move to build her own criminal empire with Electro assisting. As she lays claim to her new empire, we get to see some familiar faces along the way.

If this wasn't bad enough for Spider-Man, he has discovered Silk. Cindy Moon has been locked away since the day she was bitten by a radioactive spider--the same day and radioactive spider that bit Peter Parker years ago. Her being locked away was for her safety against Morlun. Free after all these years and because of their bond, Silk has latched on to Spider-Man, in certain ways. Obviously Dan Slott is laying some seeds for the upcoming SPIDER-VERSE event. It's a nice and subtle way watching this story unfold, knowing Morlun is to be a part of coming events.

I always get a kick out of seeing Humberto Ramos' art in the pages of AMAZING SPIDER-MAN. His style manages to capture the fun and big essence of the stories. You get a stylized feel of the action as it zips across the pages. Edgar Delgado's colors enhances the excitement of the story as well. There are some scenes highlighted in orange or in blue and it really pops off the page.

I've probably said it before, Black Cat's transformation feels a bit extreme. Yeah, it makes sense she's pretty ticked off. It feels a little odd how unwilling she is to listen to the explanation over Doc Ock taking control of Spider-Man's body, especially when the Avengers practically shrugged it off as if it were nothing. I suppose we have to keep in mind that because of One More Day or Brand New Day or whatever, Felicia doesn't feel as close to Peter as she did in the old stories. She may have been a crook before but she's going the supervillain route. There may be a logical explanation coming why there's been such a drastic change but for now, we'll just sit here and scratch our heads a little.

The art and colors look great throughout most of the issue. There were a couple panels where the inks felt a little thick on some characters. It was a slight distraction as Ramos' art usually glides across the pages.

Spider-Man has a new enemy and her name is Black Cat. Even though Spider-Man has discovered Silk, a woman who was bitten by the same radioactive spider he was moments afterwards, her help still won't be enough to stop this hate-filled Felicia Hardy. Having an amped up Electro on her side makes Black Cat even more deadly. Black Cat's hatred and attitude feels like a bit much but it is making an interesting story, combined with the other subplots thrown in. Dan Slott is keeping the fun and excitement going and Humberto Ramos' art captures the vibe of the story nicely. There's a big cliffhanger but we'll just assume he'll manage to get out of it next issue. 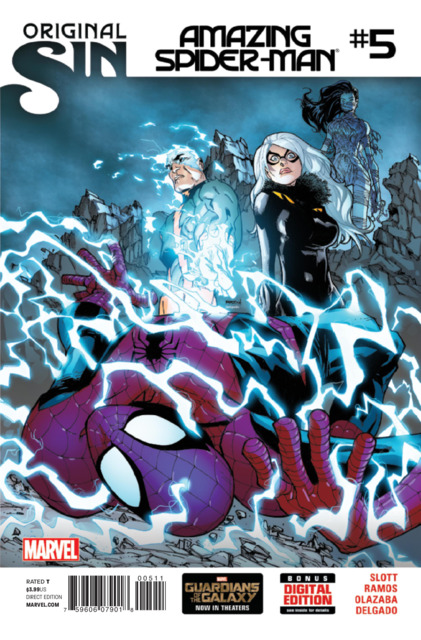