Peter Parker continues to move forward after returning to his body, but he might not be prepared to face certain people that SUPERIOR Spidey ticked off.

With each issue, Dan Slott shows us that Peter Parker's return to his body after Doc Ock hijacked it won't be an easy thing. Sure, Peter was able to get his body back but now he has to deal with the fallout from what happened while he was away. Slott keeps throwing new problems Peter's way and it continues to add to the tension of the book. What fun would it be if everything was completely perfect?

The biggest problem Spider-Man will have to deal with is Black Cat. Doc Ock showed no mercy and not only punched her in the face, he left her to be arrested. This lead to the downfall of Felicia Hardy and everything she's built for herself. She's not happy. Peter also has to deal with his new company, the girlfriend Otto got, Mary Jane's new boyfriend, as well as a bunch of people who hate Spider-Man more than before.

We also find out a little more on the mysterious female with spider-powers.

Humberto Ramos knows how to pour energy into his artwork. There's just something familiar and welcoming whenever he draws a Spider-Man issue. At the same time, it almost looks like he's added some tiny tweaks to Black Cat's look. Whether it's Spider-Man in the middle of some catastrophic action or close ups of the civilians in his life, his attention to detail and emotion is great. When Black Cat bares her teeth and claws, you will feel her anger.

It's understandable that Felicia would be ticked off. She makes an interesting opponent for Spider-Man. It does seem like a complete change in her character, even though she started out on the wrong side of the law. The idea of Felicia putting innocent lives at risk or possibly teaming up with Electro seems a bit much. Her logic and reasoning is...interesting. She doesn't care why things happened the way they did. She just wants revenge. Of course we'll have to wait and see how it all turns out.

Mary Jane's quick arrival and the specific mention of her boyfriend on the news felt a little too convenient.

Spider-Man is back and it looks like the old Parker luck is still around. Peter Parker is back as Spider-Man and Dan Slott is making sure it's not simply more of the same old thing we saw before. It's great to see the beginnings of the next chapter in Spider-Man's life unfold. Slott is setting the stage for new problems for Spidey as well as fleshing out the world around him. Humberto Ramos' art adds a fun and frantic feel to the story but also lets you feel the emotion the characters are feeling. Black Cat has declared Spider-Man her enemy and it feels a bit much but you can't argue that it'll be interesting to see how this story continues to develop. Dan Slott is keeping us on our toes and you never know what will happen next. 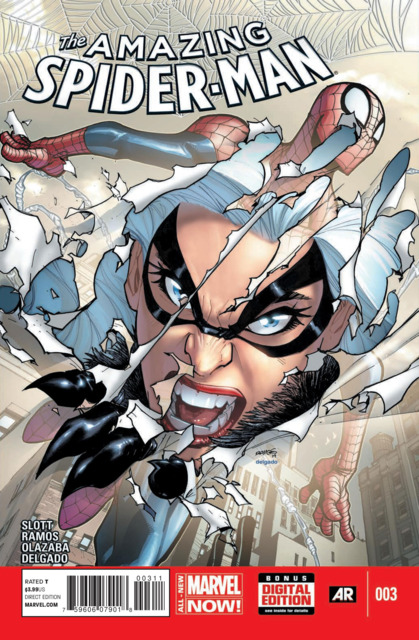