The Amazing Spider-Man #1 - Lucky To Be Alive; Recapturing That Old Spark; Crossed Paths; How My Stuff Works; Homecoming, Sort Of; Kaine; Learning To Crawl: Awazing Reality

Peter Parker is back. So are a bunch of other people. Come celebrate the return of the Amazing Spider-Man as he tries to adjust to recent events. There's a ton of other stories as well.

Peter Parker is back. This is a moment to celebrate. That isn't to say we didn't enjoy SUPERIOR SPIDER-MAN. That gave us interesting story after interesting story. Just because Peter is back doesn't mean everything that happened before can be forgotten and we are back to the old status quo. There will be several repercussions that Peter will have to deal with for some time.

Before we get into the heart of the story, we get a little sneak peek at what's coming up in later issues. If you've seen the Original Sin teaser for the Spider-Man issues, or the preview for this issue, you know what big secret is about to come out, relating to the moment Peter was bitten by a radioactive spider.

Dan Slott continues the adventures of Spider-Man and doesn't skip a beat. Having Humberto Ramos' art does help bring back the old AMAZING feel. You can almost forget that we just had Doc Ock in Spidey's body not too long ago. But when the changes Otto's caused in Peter's life continue to pop in his face, there's no way you can forget the things he's accomplished, both good and bad. It's a nice mix of the old and the new. With everything that's happened, Peter can't just simply go back to how things were before and neither can this title. We will feel Octavius' tenure as Spider-Man for some time. Otto may be gone but he won't be forgotten (although there was an interesting hint at C2E2 last weekend).

For those concerned about the $5.99 price tag, you definitely get your money's worth. The main story is a regular 20-page story. You also get several stories that further set the stage for the stories to come in this series. There's a 5-page Electro story, a 5-page of a (ticked off) Black Cat story, 3 pages on how Spider-Man's "stuff" works, five pages of Spider-Man 2099, five pages on Kaine, eight pages on a new upcoming hero (possibly) and a two-page letter column. Then of course there's the special bonus of INHUMAN #1.

This was a spectacular issue but it did feel more like a showcase of what's to come. Of course that isn't a bad thing. The short five-page stories let us know what we can expect and seeing them here takes away the need to explain the characters' motivation when they do appear next. The quick teases were almost like getting small tastes of a meal and left you wanting more.

Since this was a number one and there may have been stubborn readers that refused to read SUPERIOR SPIDER-MAN, there are several moments where explanations are given to what Doc Ock has done as Spider-Man. It made it fee a little redundant if you've read SUPERIOR. Now that Peter is back and it should be clear to new readers what happened before, the series should be able to soar to new (old) heights.

Including INHUMAN as a bonus was cool. It does seem a little weird since there's zero connection to this title or character. Also, I already bought and read it. It's cool for those that haven't. It just didn't seem necessary here. (This criticism has no effect on the score).

Spider-Man is back to be Amazing. Dan Slott's SUPERIOR SPIDER-MAN run will remain as one of our favorites since it shook up Spider-Man to his core. As we witness the next chapter in Spidey's life unfold, there will be several repercussions for him to deal with. Having Humberto Ramos' art helped to usher in the feeling of the return of the AMAZING Spider-Man because of his previous work on the series. This issue is like a celebration as we are treated to several short back up stories that further set the stage for what's coming in Spider-Man's life. Peter Parker may be back but he won't have very long to celebrate. He has a big mess to clean up and several angry foes that will be gunning for him. 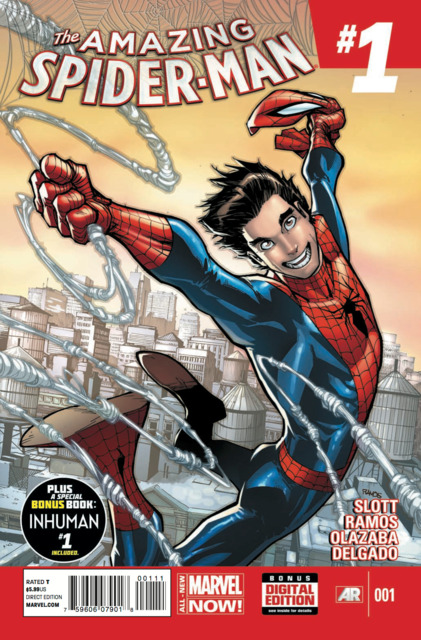