The Amazing Spider-Man #1.1 - Learning To Crawl Part One: The Show Must Go On

You probably know the story of how Spider-Man started out his career. Here’s the parts you didn’t know about.

I have to admit, the idea of a series going back to the early days of Spider-Man’s career made me roll my eyes a bit. This is something that’s working in BATMAN with Zero Year (that’s just because of the New 52 reboot). I was also a big fan of UNTOLD TALES OF SPIDER-MAN. This just didn’t seem necessary.

What happened after Uncle Ben was shot? We know he was a TV performer but when next we saw him, he was trying to join the Fantastic Four and be a hero. Dan Slott sets out to fill in the gaps in that timeline (who paid for Uncle Ben’s funeral?). We get to see a young and inexperience Spider-Man trying to figure things out. You have to remember the level of guilt Peter must have been dealing with plus the fact that, financially, he and Aunt May were pretty screwed. Getting tiny glimpses into surrounding Marvel Universe (seeing the "first" appearance of certain future foes) was a nice touch as well. If you read last week’s new AMAZING SPIDER-MAN #1, you know there’s mention of a new character that was around when Spider-Man first performed on television. We’ll see more of him here.

Ramón Perez’s art fits the tone and time period of the story. Because it’s supposed to take place back when the series first started, it’s great Marvel went with a style that feels like it would fit in with the original comics. Ian Herring's colors adds to the tone of the period.

The main problem is how necessary is this series. I keep hearing readers are struggling with the number of comics on their pull lists. This is a good and fun series but there's some scenes you expect, like Peter potentially going off on Flash Thompson. We do have a new character that may play a role in the current AMAZING SPIDER-MAN issues but the casual Spider-Man fan may wonder if this is essential. There can’t be any huge events or repercussions that will affect Spider-Man directly. If this is to plant more seeds that will pop up in today’s comic, that makes some sense.

There's also the fact that this is issue 1.1. It feels like this should take place after last week's ASM #1 rather than way back before the original ASM #1. But that's the problem with Marvel constantly relaunching volumes.

Let’s take a trip back to the early days of Spider-Man’s career. Not a simple retelling of stories we’ve already seen, this series sets to fill in some of the gaps between AMAZING FANTASY #15 and AMAZING SPIDER-MAN #1 (Volume 1). With Dan Slott writing, you can’t help but wonder how much will come into play in the newly relaunched AMAZING SPIDER-MAN series. Ramón Perez’s art matches the tone of the time period nicely and it could be very interesting to see what happens to Spider-Man in this transitionary stage. If you think you know the whole story behind Spider-Man’s early days, it turns out there’s more than you realized. 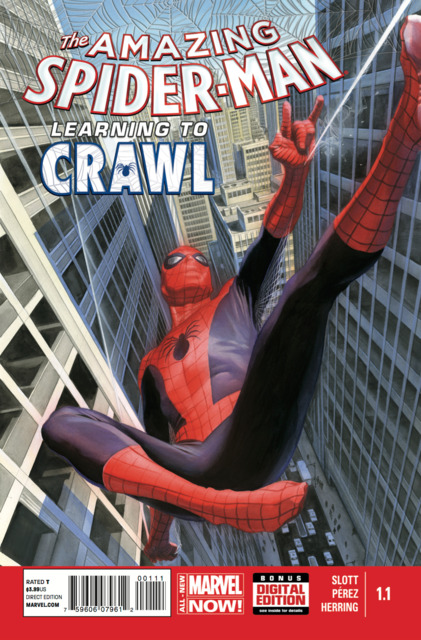