The Mad Titan returns in his own series. Lemire and Deodato begin the next stage in his story.

We don't often see series center on villains. We may love to hate them, but it can be hard to fully cheer on the ones that slaughter countless innocents. Thanos is one of those villains you would have to despise were he real. His many accomplishments and determination despite failures makes him a fan-favorite bad guy. Despite his popularity, one would wonder how you could have a series focus on a guy whose main goal was to destroy the universe. Jeff Lemire easily takes on the job.

With Mike Deodato Jr. on art and Frank Martin handling the color, the mood and tone for the story is immediately set. Not only is Thanos making a comeback after being captured during Civil War II, we find out what Corvus Glaive has been up to. Glaive formerly called Thanos his master, but that isn't quite the case anymore. Thanos will also have other problems to deal with as his son, Thane, is gathering forces to take on his father. Bringing in other characters is good to round out the story. Otherwise we'd simply get a book where Thanos went around killing everyone or was sitting around thinking about Death.

Lemire is crafting a story with different layers. Where the art and color become crucial is during Thanos' acts of destruction. He's not typically the sort of villain that becomes a chatterbox when fighting a foe. His actions definitely speak louder than words. We don't "see" what Thanos is thinking, but he's easy to read from his expression and the way he carries himself in each panel.

As cool as stories with Thanos may be, we've seen quite a few over the years. Lemire has something a little different up his sleeve. This isn't going to be a story about Thanos trying to destroy everything. The revelation at the end adds a new twist and makes you wonder what his motives will be. Will Thanos embrace what's headed his way or will he decide to fight it?

The only problem here is this issue is tasked with setting things up. We don't know how Thanos arrived here from when we last saw him. His new development brings up some questions as to where this book can or will go. It's easy to assume other factors will come into play to prevent the gathering opposing forces from putting an end to Thanos' evil ways. Still, you'll be left wondering what the next issue will bring us. Lemire definitely knows how to grab our attention.

We see so many comic series telling the stories of superheroes and teams fighting the forces of evil. Thanos sets out to give us something different. The Mad Titan has almost become a one-dimensional villain over the years, but Jeff Lemire is cooking up something new for him. With Mike Deodato's art and Frank Martin's colors, we get a gorgeous story with plenty of intrigue, violence, and suspense. This isn't quite the book I was expecting—it's better. 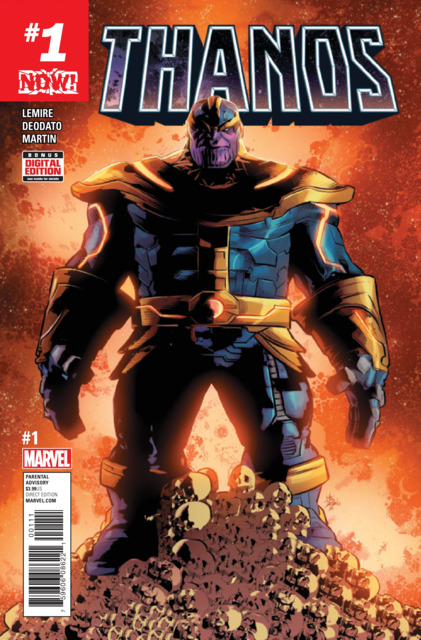