Krang's origin is revealed in the first Micro-Series for the villains!

Without question, the best part about this issue is the art by illustrator Mike Henderson and colorist Ian Herring. My only small complaint is the short battle sequences are too chaotic with the laser blasts, but aside from that, this issue looks great. The heavy focus on shading works so well, making Krang's armor look super formidable and it does an excellent job animating Krang when he's out of the suit. Pretty much every page looks fantastic and, while I wasn't the biggest fan of the story, my eyes had no complaints soaking in all of the panels. Also worth praising: the cover by Tyler Walpole . It's phenomenal and would serve as a jaw-droppingly cool poster.

I may not dig Krang's origin story, but I'd be a terrible liar if I said I didn't have a fairly good time watching it all unfold. Despite my gripes (see below), writer Joshua Williamson keeps things moving at a tight pace and does a good job bringing Krang to life without making him sound too campy. He definitely has the voice down, and as ridiculous as the turn of events may be, it's still a blast to follow along.

Opinions are definitely going to be mixed on Krang's origin story. I'm sure some of you will think the tale is awesomely badass, but for me, it was just a little too out there for my taste. Seeing him transform from a spoiled and lazy brat to a Rambo-esque commando riding a beast in just days felt unbelievable to me and seeing him riding that creature like a boss was a, "Wait, what?!" moment for me. I know that can easily be met with, "You're talking about a book about mutated ninja turtles," but the poor guy was initially was running like a clown at the sight of danger and their specials clearly doesn't have what it takes to survive in such a hostile environment. Yes, he eventually found out it's his mind that makes him superior, I just feel like he wouldn't survive long enough to have that epiphany and riding the creature was unintentional comical for me. I guess I would have strongly preferred an alternate path to have him realize he's stronger than he believed, but what's done is done.

I thought his troops were durable, so how'd he kill the soldier in the end? It seems clear used his teeth, but I was under the impression their skin was too tough for something like that. Regardless, that panel was delightfully vivid.

I've been more than transparent with my love for IDW's TMNT reboot. They've taken a more than familiar product and given it plenty of respect while making changes that feel fresh and interesting. The Micro-Series was a brilliant way to give individual characters some much appreciated extra attention and development and, up until now, I've loved every single one of them. Now, I know many on this site view a 3 star rating as a bad thing, but keep in mind, I view the star system as being like Netflix's -- a 3 means "okay," and, that's exactly how I felt about the issue when I was done with it. While it looks superb and the dialogue is sharply written, Krang's origin story is just a wee bit too out there for me for me to take seriously. 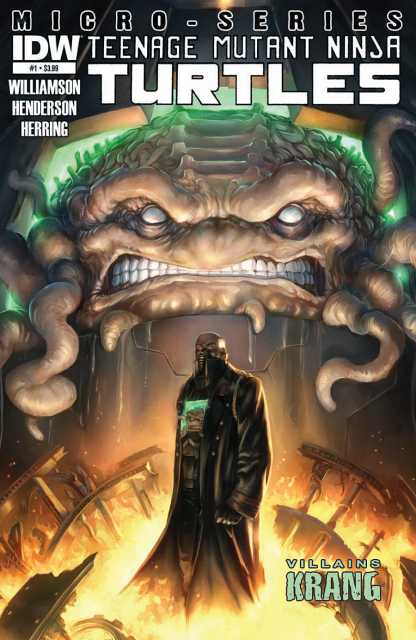