The dudes are stuck in the prehistoric age!

One word comes to mind while thinking about artist Ross Campbell and colorist Bill Crabtree's pages: lovable. As we saw in the Northampton story, Campbell's character work is brilliant. It's a slightly cartoonish style that fills these individuals with so much expression. He does a terrific job with the look of every creature and the end result is a lot of adorable scenes. To top it off, there's also a brief moment which allows Campbell to once again prove his talent isn't limited endearing illustrations. It's a panel that's simply badass. Writer Paul Allor packs a lot of visual comedy into the script and these wonderful pages absolutely deliver the laughs. You can try and resist it, but eventually this book will make you smile. And the new character, Pepperoni? Every single look at Raph bonding with the little dinosaur melted my heart. It's an overwhelming amount of cuteness. This character needs to become a plushie. It's that simple. Crabtree's bright and energetic coloring then serves as the perfect compliment to Campbell's style and the tone Allor establishes for the story. These visuals are consistently vivid and very pleasing.

As for Allor's script, it's basically a joyful adventure. There's a consistent flow of levity (everything from slapstick to banter), and while some of the jokes may not make you laugh out loud, they're guaranteed to at least make you smirk. After all, how can you not when they're being complimented so well by Campbell and Crabtree's work? There even appears to be a nod to Jurassic Park thrown in there. While the standalone story is primarily lighthearted, there's a little more substance to be enjoyed here, too. Based on TMNT: UTROM EMPIRE, Allor obviously has a whole lot of love for the franchise and wants to help it expand. This chapter may not make big strides in that department, but it does successfully tease the origin story for a certain group of characters. Said group may not be playing a big role in the current IDW universe, but they're a fan favorite and it's hilarious to see they're a direct result of the Teenage Mutant Ninja Turtles' actions.

The timing of this book is a little odd since it follows the 2014 annual issue, but that hasn't come out yet. They even joke about this in the recap page. For longtime fans of the franchise, this will be no big deal since we're familiar with Renet. For new fans, it might be slightly jarring to get a randomly glimpse of this character.

For many of us, the title of IDW's latest limited series delivers a whole lot of nostalgia. The video game was full of amusement as it guided players from stage to stage. This comic is clearly aiming to deliver the same level of enjoyment value, and, so far, it's succeeding. It seems like each chapter will serve as a new "level" which places the heroes in a half shell in an all-new setting for an all-new standalone dose of entertainment. This debut issue is every bit as lighthearted and delightful as you'd want it to be. The artwork is beyond lovable and the story's a total blast. This is absolutely a must read for any TMNT fan that simply wants to enjoy an awesome serving of fun. 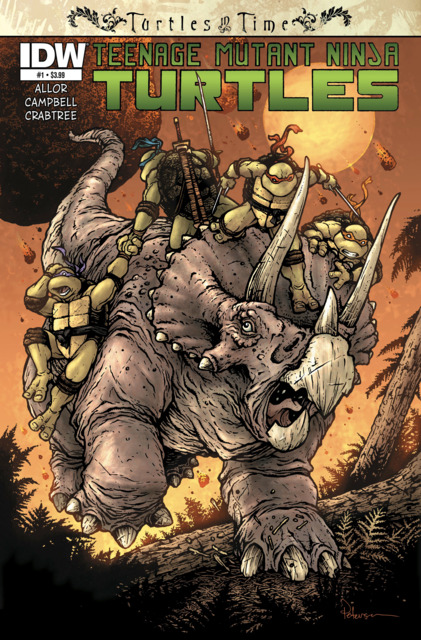