Chi-You is bringing the fight to the heroes!

What would you want from a TMNT/Ghostbusters crossover? Whatever it may be, odds are it's in this limited series. Comedy and amusing interactions between the characters is an obvious must have and co-writers Erik Burnham and Tom Waltz have certainly delivered with that. While nothing here made me laugh out loud, there's a handful of lines that made me smirk and I was left wanting to see even more interactions between these two teams. That goes to show these writers get these characters and you should expect nothing less from them considering they're the minds behind each series at IDW. It's too bad the Ghostbusters series doesn't exist anymore, but I won't get into that. Hey, maybe with the upcoming reboot they'll do something with the franchise? Sorry, moving on.

You'd also expect action scenes that would make both teams shine. While the Ghostbuters focus on technology and pretty much avoid hand-to-hand fights at all costs, the Ninja Turtles leap into action and get up close and personal. The villain, Chi-You, may not be interesting (which feels like a bit of a missed opportunity), but there's just no denying the fact he has what it takes to make both of these teams show off. It's a shame the guy feels like such a generic villain, but at least he's able to produce an action-packed finale that gets almost everyone involved. You won't see any Ghostbusters attempting to use one of the Ninja Turtles' iconic weapons, but maybe -- just maybe -- you'll see a hero in a half shell get to put some technology to use. Okay, you do and it's so much fun watching these worlds collide. That's not really a spoiler, right? I mean, Donnie put on a Proton Pack in a previous issue!

If you're having two different worlds come together to battle a surreal enemy, you want visuals that make this feel every bit as cinematic and exciting as it should feel. Thankfully, artist Dan Schoening and colorist Luis Antonio Delgado have no problem handling the action-heavy issue. Schoening's style feels like a crisp cartoon brought to life and Delgado goes all-out with the coloring. Whether it's a simple change in a room's lighting or a bright projectile, this team makes sure it looks delightfully animated.

The conclusion plays out in a very standard way and Chi-You continues to sound like a generic diabolical villain. Don't get me wrong, it's a good time, but none of the story's developments are going to really wow you and Chi-You's insults and taunts come off as familiar. It's all satisfying yet never truly gripping. You probably won't find yourself ever doubting the outcome or shocked by a twist. It's familiar yet still a bunch of fun.

TMNT/GHOSTBUSTERS #4 is pretty much popcorn entertainment that readers of any age can enjoy. There's a bunch of terrific looking action, the character dynamics are a blast, and while it may not drop any compelling twists, it wraps up in a satisfying way and absolutely celebrates both franchises. I had high hopes for this limited series and thankfully, it was every bit as fun as I hoped it would be. With dialogue this good and visuals this animated, part of me wishes there would be a fifth issue that consists purely of the two teams eating pizza at a table and just talking to each other. Maybe if we're lucky IDW will give these two groups another team-up at some point. 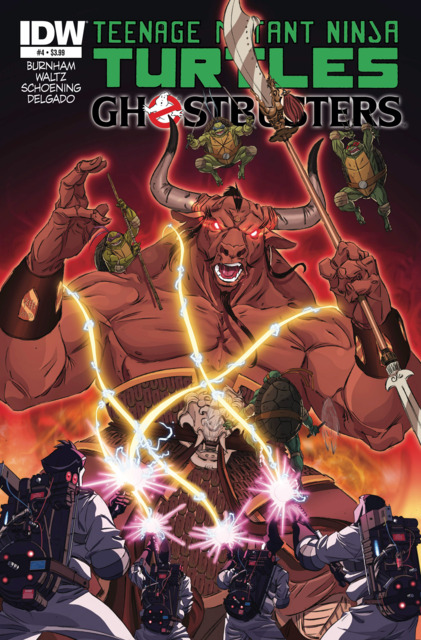