Old Hob and Slash are up to no good and the heroes in a half shell want to know what's going on! Also, Hun ambushes Casey Jones.

Kevin Eastman, Tom Waltz, and Bobby Curnow's story has yet to disappoint, but this is yet another chapter where artist Mateus Santolouco and colorist Ronda Pattison really get to show-off. They really do a topnotch job breathing so much life into these characters. Michelangelo is downright adorable in this one and seeing a silly version of Slash will warm your heart. The look of fear and discomfort in Mikey's eyes as Slash puts his giant arm around the turtle is absolutely priceless.There's a new mutant and he's sure to make you laugh, as well. This art duo also delivers big time with the more dramatic moments. They do an excellent job making us feel the intensity in Casey Jones' scene and the way Pattison fills the key moments with vivid colors is superb. I'm continually impressed by the work these two pack into every panel. Mike Henderson takes over the art on the third page, but it's just for a flashback story so the slight change in style isn't jarring (the different shade helps, too).

This chapter makes some pretty big strides in the narrative. First and foremost, we have a follow-up to the uneasy situation between Casey and his dad, Hun. The conflict here is gripping and adds a nice amount of emotion to the issue. You can't help but love one of the lines Casey exclaims when the odds are stacked against him, too. Additionally, the conclusion of this encounter offers an organic connection to another plot thread, so it's nice to see that element is being incorporated so soon after it was established. Meanwhile, the situation with Old Hob and Slash continues to get more interesting. You can tell Old Hob doesn't quite have what it takes to be one of the top schemers, but that won't stop him from trying. The creative team plays off of this and Hob's approach to things generates a couple of good laughs. I especially love how the existence of the new mutant is justified. On top of all that, there's a massive development with Slash and it has me wondering what that means for the character. Waltz, Eastman, and Curnow also do a solid job jumping back and forth between these scenes. It keeps the pacing exciting and always leaves you anxious to see what'll happen next.

Given Raphael's hotheaded nature, I can't help but feel like there was an underreaction from him. Yes, Raph is displayed as ready to attack (he's gripping his sai), but given the fact he doesn't trust Old Hob to begin with, it's surprising to see him essentially hear him out and have a dialogue with him instead of jumping to conclusions and being more aggressive.

Minor gripes: the cliffhanger definitely has my attention, but seeing as we've barely chimed in on Leonardo and Splinter since Northampton, it feels pretty random and I have literally no clue what's going on. I know good things come to those who wait, but a little more focus on this side of things would have been appreciated. And even though Lindsey Baker was held at gunpoint and then kidnapped by two seemingly evil mutants, she seems pretty okay with the whole thing. Sure, there's some time we didn't see between her and her captors, but given the unfriendly nature of how everything went down, you'd think she might be a little more shook-up and need more than one panel to apparently get over it.

TEENAGE MUTANT NINJA TURTLES #35 is a really good issue. It makes some major developments, looks consistently fantastic, and makes sure it always has the reader's attention. It manages to strike all of the right emotions, too. There's a gripping scene in the graveyard and the twisted situation in the apartment is surprisingly humorous. This single issue manages to bring quite a few changes to the universe, so I'm thoroughly excited to see where it'll go next with these characters! It's a shame Leonardo has been cast aside in this story, but it looks like the next issue is going to change that. Issues like this one prove it's a great time to be a fan of the turtles. 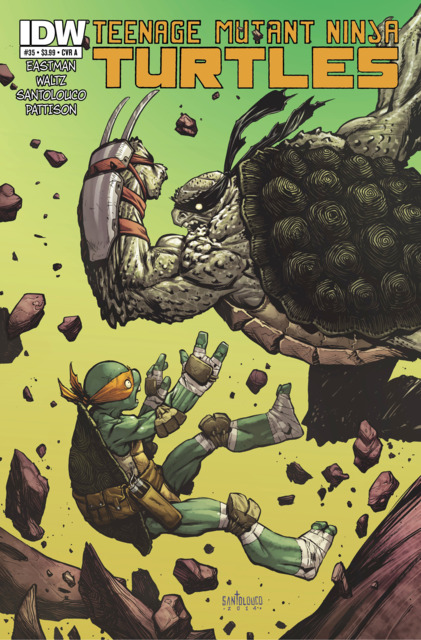