It's time to meet IDW's version of Metalhead!

Metalhead, the lovable robot, makes its debut! Even though the IDW team clearly knows what fans of the franchise want to see (e.g. characters we know and love), they've been able to avoid making their run feel too familiar. We've already witnessed Metalhead in other TMNT incarnations, and this is another example of the IDW team tackling a fan favorite and making it feel like an all-new experience. It could so easily feel like "hey, here's that character you love" but instead you can tell they're making a solid effort to revamp what we already know. For one, they've completely changed the little dude's origin story and what follows pretty much exists just so they can hit us with an extended action scene. Thanks to artist Mateus Santolouco and colorist Ronda Pattison's praiseworthy visuals and page layouts, the battle is hugely entertaining and a ton of fun. I won't spoil anything, but I will say there's some seriously cool panels in there and these two do an awesome job making this fight feel every bit as cinematic as it can get.

Despite Donatello and April being on the cover, this issue did a great job highlighting Angel. Sure, she has a dynamic with Hun, Casey, and the Purple Dragons, but her role hasn't really been all that extensive... not until now, at least. This issue teases a major change in the character's direction and it's a legitimately exciting one. We know she has a good heart and she'll fight against all odds, but now it's looking like she just may have a new way to even those odds. I'm really anxious to see where this new plot point goes!

The addition of Metalhead and trying to learn more about the Technodrome means we get to see more of Donatello and Harold's "friendship." The banter between them is always a delight and ongoing gags like "obtruse" still work well. In a story where so many characters are blatantly good or evil, it's an amusing change of pace to see someone in the middle and acting like a total jerk. Harold could be a painfully off-putting character in large doses, but this is something the creative team obviously knows and that's why his limited appearances work so well. Leonardo and Master Splinter also have a quick appearance, but honestly, it feels as though that's there to help keep new readers up to date. That said, it doesn't come off as blatant exposition and instead focuses on the fact Leonardo is, much to everyone's surprise, not necessarily seeing eye to eye with Splinter.

As stated above, Santolouco and Pattison do a terrific job handling the action scenes. You can feel the heat of the flamethrower and the intensity of a laser blast, but the book's excellent visuals are by no means limited to the chaotic scenes. This issue thrives on expressions and these two do such a tremendous job giving these characters a crazy amount of life. These don't feel like static images. You can feel the motion behind every character's actions and their face speaks volumes about how they're feeling on the inside. It's consistently great looking. My only minor gripe is one onomatopoeia has a shadow, so it made the sound effect feel like it was part of their world. I understand why that decision was made, but it was a little jarring.

Michelangelo and Raphael don't make a single appearance in this issue. That's better than forcing them in just for the sake of including them, but it feels a little odd not seeing what's going on with them at all. I understand the heroes in a half shell have received a majority of the focus in this series and it's great to see the human cast get more attention, but I definitely felt their absence and couldn't help but wonder why we didn't see them at all. Perhaps the next issue will focus heavily on them? And, it's not too big of a deal, but aside from the big action scene, you can tell this issue is basically buildup for what's to come.

Minor gripe: in this universe, it almost feels like Donatello needs Harold. I like the dynamic between these two and I completely understand Donnie's resources are limited, but it would be nice to see the guy accomplish a little more on his own.

IDW continues to deliver pure fan service. They're able to give us what we want to see and include just enough change to make it feel like a totally unique experience. They aren't changes for the sake of changing things, either. You can tell they really respect the source material and want to apply practical and exciting alterations. Even though we've seen different incarnations of Metalhead before, this doesn't feel like more of the same and the result is an incredibly fun and superb looking issue. Plus, that ending is sure to make any TMNT fan count down the days until they can see what happens next. 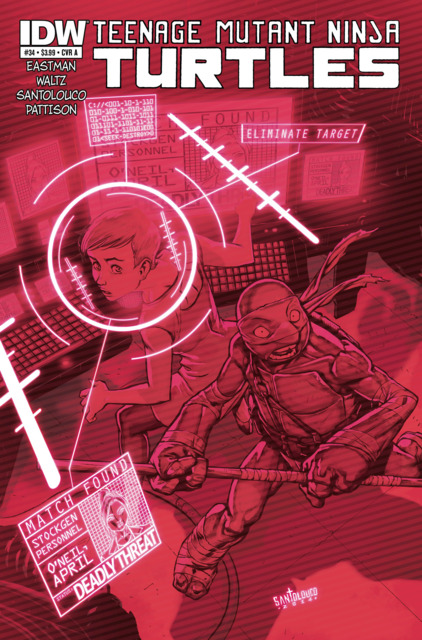