It's the aftermath of Cataclysm!

SURVIVE pieces together the life of characters from the Ultimate universe in the after-math of Cataclysm. The real winner here is the Monica Chang story and her future in these books. Writer Brian Michael Bendis does something huge in the Ultimate universe which completely changes everything about Chang's life. While the overall issue was just ok, this very small development is the highlight of the overall issue. Without spoiling anything, it's pretty awesome.

While many may be split on Joe Quinones art, I really enjoyed it. Sure, his more cartoony style does take away from the seriousness of the issue, but it really puts the reader at ease here. The Ultimate universe has always been a bit more serious than the 616, so Quinones gives readers a bit of a breather while things settle down. By the end of the issue, fans will feel a bit more relaxed because we're not locked into some gritty, darker artwork.

All-in-all, SURVIVE's job is to set up the new Ultimate series, which it does pretty well. It does prepare the reader for the future of this series, which is great. Bendis gives fans glimpses into what we all have to look forward to in the upcoming months.

If you read CATACLYSM, then like everyone else, you got to see Captain America die, but not really, since he died off panel. So the entire time Tony Stark is giving a speech to all these heroes, you can't help but think "He's not dead. We didn't actually see him die." Sure, the characters don't know that, but the readers won't really feel that emotional impact that the scene is supposed to have because they never saw Steve Rogers die.

SURVIVE tries its best to focus on the aftermath of CATACLYSM, but ultimately (no pun intended), it falls short because there's way too much going on to fit into a one-shot. Within this issue, SURVIVE tries to cover Captain America's funeral, Franklin Nelson's big discussion with Monica Chang, Reed Richards building towards the future, Miles Morales and Spider-Woman starting something new, and Kitty Pryde coming out of hiding. As annoying as it is to jump from event to event, grazing over this event in a one-shot is a bit of a bummer. If this event was as big as they told us it was, then the aftermath deserves its own mini-series.

Falcon turned out to be a stand-out portion of the event, and he's on the cover of this book, but he's not in the issue at all. It's an utter disappointment that he's missing from SURVIVE.

While Joe Quinones art is a bit more cartoony, it works, except in one case. Kitty Pryde looks nothing like Kitty Pryde. If none of the characters in the scene said her name, you'd have no idea who the character is.

SURVIVE does a great job at setting up one aspect of the new Ultimate universe, but falters with almost everything else. Cataclysm went out with a whimper and while this is a step in the right direction, it's only a small step. Monica Chang's story is the standout in the issue, but the problem is that there's a bit too much going on here for a one-shot, and while this book is supposed to set-up the new Ultimate series, it feels like SURVIVE would do better as a fully realized bridge between CATACLYSM and the new series rather than a doorway. 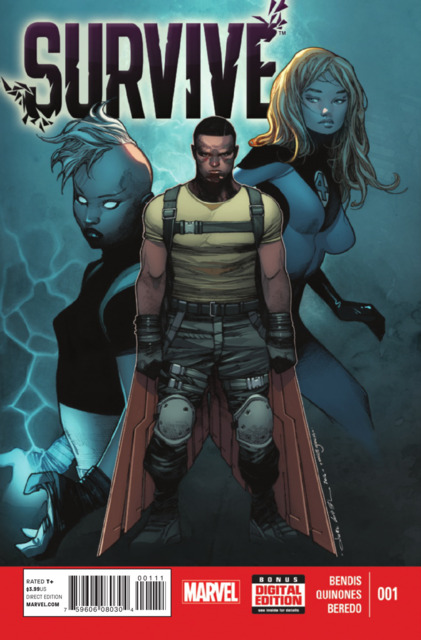