The events of SUPERMAN: DOOMED #1 have made Superman undergo a major change. Can Wonder Woman help him through this process?

This review has some SUPERMAN: DOOMED #1 spoilers, so don't continue if you haven't read it yet!

Are they gone? Okay, good. In first chapter of Doomed, we saw Superman inhale Doomsday's particles to protect everyone else and, thanks to solicitations (and even this cover), we know that's going to transform him into the next Doomsday... or something Doomsday-esque. This issue delivers a big reveal of his new appearance and, while the art team does a fine job with his new look, what makes this issue work is how it impacts Clark's personality, not his appearance.

Simply put: this transformation is turning Superman into a jerk. He's not tripping people and laughing at them like Nelson from The Simpsons, though. Instead, his filter is off and he's letting his more negative thoughts come front and center. Considering this series is first and foremost about his developing relationship with Wonder Woman, you can bet this means there's going to be some brutally awkward conversations. It's great seeing this unfiltered side of Clark come out. He's always trying to make things work, but the fact of the matter is this is a complex relationship and the issues he brings up are worth discussing. And, unless you're a complete Batman fanboy, you can't help but find his remarks about Bruce somewhat amusing. Also cool: one of Diana's new abilities as the God of War is put to use. Truth be told, that's what made the segment with Lois Lane standout. Because, aside from that, it didn't really add anything new to the narrative. The opening was to solidify what's happening to his personality and Batman's was to elaborate on the finer details, but the part with Lois almost felt like it was there just to have her and Diana talk now that the relationship status has changed. It wasn't really as engaging as the other bits and it's not as tense as you may expect, but it wasn't bad, either.

I enjoyed Tony Daniel, Tomeu Morey, and Sandu Florea's visuals a good deal. My only real gripe is that sometimes expressions feel a little off or stiff, but the amount of energy and detail that goes into every page counters that and then some. Environments fade away from time to time, but sometimes -- for example, Clark's scene with Cat -- the vivid background helps boost the energy and the intensity when things heat up. I'm sure we'll all have our favorite pages in this one, but for me, Batman gliding across the street and windows shattering definitely left an impression.

Clark's condition is right there on the cover (and we've seen it in solicits), so the impact of its eventual reveal is lessened big time. It's a cool approach -- love the focus on eyes and mouths -- that would have worked if we didn't know Clark's new look, but sadly, that isn't the case. Because of this, the build-up approach just doesn't hit as hard as it should. Also, I get what writer Charles Soule was trying to say when Diana realizes she overlooked the obvious, but it's a little tough to believe that option didn't cross her mind at all. Logically, you should look at all of the main locations, right? It's not like we're talking about one of his favorite hangout spots or whatever -- it's a place she literally has a key to. And, as much as I enjoy the artwork, dedicating Batman and Wonder Woman's encounter to a double-page spread seems like a bit much. Yes, it's a great looking image and it's certainly full of life, but I'd rather see an extra page dedicated to the conversations that were occurring in this issue.

While the opening of Doomed hit us with a massive slugfest, Soule's follow-up is purely character-driven and rightfully so. Instead of just having Superman act like a complete jerk and simply having some fun with it, Soule's able to tie this new mentality to the focus of this book: Kal-El's relationship with Wonder Woman. It's essentially a one-way argument since Diana's focused on helping him and not humoring his questions and accusations, but it's still a gripping bit of dialogue and hopefully these topics will reemerge. Throw in some consistently pleasing artwork and you have a solid chapter of Doomed. Sure, the ending feels a little sudden, but it just goes to show how much Diana can help him in his time of need. 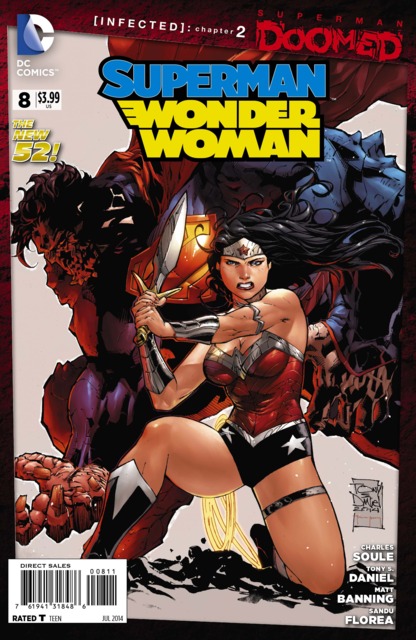