SUPERMAN/WONDER WOMAN's prelude to Doomed is finally here. The upcoming storyline makes writer Charles Soule juggle quite a few issues: the return of Doomsday and everything involved in it, Superman and Wonder Woman recovering from the nuclear blast, and how they'll move forward after Clark confessed he loves her. Seeing as these are three pretty large plot points, Soule dedicates just a moderate amount of time to each one. It would be great to see certain elements receive more attention than others (e.g. more discussions about their relationship and perhaps not the world around them or what's going on in their own comics), but it's a somewhat understandable decision since there's quite a bit to tackle as the book moves forward. Plus, watching the two go on a more "traditional" date is a nice little change of pace and most certainly wasn't an expected development.

Even though there's three artists (Eddy Barrows, Paulo Siqueira, Barry Kitson), the changes aren't that noticeable since they apparently switch when the location undergoes a significant change. Hi-Fi coloring the entire issue also gives a nice sense of consistency. The drastically different locations -- ground zero, London, and deep in the ocean -- makes the slight alterations way less jarring and far easier to accept. Doomsday looks seriously badass as he clutches a wall and has a spotlight on him; Superman's appropriately creepy looking as he heals; and the club has a fitting sense of energy to it. Each scene definitely brings its own strengths front and center.

A common complaint I see from readers is that Superman serves as the "white knight" far too often. This is something I haven't agreed with on a few occasions, but man, that crowd is going to have a field day with this one. Even I found it a little odd to have Superman -- who is so weak that he looks like a zombie -- need to carry Wonder Woman -- who appears weak but not in critical condition -- as they fly away from ground zero. Based on appearances alone (and not to mention the fact Superman endured more of the explosion than Diana did), it would have seemed more fitting for these roles to be reversed in this case.

It's a little jarring to fast-forward to Clark and Diana having such a casual and, well, "normal" date after such a grim event. I do appreciate Soule delving into both of their minds about Clark saying he loves her. It is understandable things would be a little uncomfortable after only one of them says the L word; however, it felt like there was more build-up for the next story instead of follow-up with such a big moment in their relationship.

While it isn't necessarily a "bad" thing, there's more than a few moments in this book that serve purely as set-up and you'll need to keep reading the series to get answers. Usually this isn't a big deal, but for me, this occurred with quite a few things. Also, I'm unclear about the scene with Doomsday. I was left trying to figure out why they'd blatantly waste that ship. They stated they have records on Doomsday, so they of course knew it would fail trying to snag him. But again, this appears to be another "wait and see" element. And, speaking of the Doomsday segment, I wasn't a fan of the first panel layout. It worked well for the middle to get a better understanding of the scope and the bottom was fine, but the tough was a tad difficult to follow at first since the panels were smaller.

SUPERMAN/WONDER WOMAN #7 will likely serve as a better read when it's collected in a trade or you have immediate access to the next issue. Because, just like it says on the cover, it's a prelude to the upcoming story Doomed. There's a little bit of emotional follow-up to the nuclear incident and it's nice to see these two out of their element, even if it's just for a little bit. But for the most part, this issue establishes a lot of questions and now it's just a matter of time to see how it's all handled. At any rate, that final page most certainly has me anxious to see what's next. Sure, the villain's hand emerging first is something we've seen so many times before, but given the action-packed nature of this book, I'm anticipating some massively fun brawls. 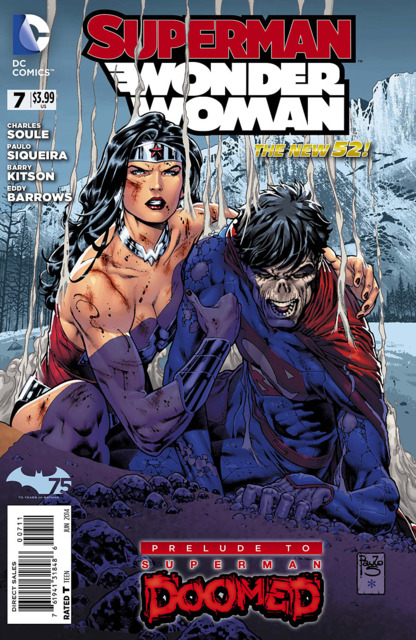