Superman/Wonder Woman #4 - What Any Man Would Do; The Blog Read Around the World

Superman and Wonder Woman's secret is out. And what exactly is Zod up to?

It's almost hard to imagine that the world still didn't know Superman and Wonder Woman were a couple. Of course it makes perfect sense because why would they tell anyone? If they were off together on missions, it could just be that they are teammates in the Justice League.

Charles Soule takes a different approach on the discovery of this news. While we do see some reaction by other characters and average citizens, getting some insight into how Superman and Wonder Woman feel about all of this and each other makes their relationship feel more…real. Many felt the two of them together was simply a gimmick. But Soule writes them both in a way that despite how massively powerful they are, they do let their guard down with each other. They do have a softer side beneath the powerful image they convey.

Then, of course, there's General Zod. Soule makes the scenes with him incredibly juicy. This is a different Zod than we're used to. He is powerful but we see he is a brilliant strategist as well. He has his own plan and that could mean bad news for Superman.

Tony Daniel's art is superb. He beautifully captures the private moments between Superman and Clark when they are having a candid conversation. When the action kicks in, he doesn't miss a beat. Soule and Daniel are a great combination on this book.

There is a back up story as well that focuses on the news revelation from Cat Grant's perspective. It's further adds to making these characters more credible by allowing the supporting characters for both Superman and Wonder Woman to have roles in the story.

At the end of the main story, there was a confusing "Krrrrrack" sound. I looked at that and the next page several times but wasn't quite sure where the noise came from.

SUPERMAN/WONDER WOMAN is becoming one of my favorite DC titles. Charles Soule does a great job balancing the incredible feats the two heroes are capable of as well as showing us a more human side to them. Tony Daniel's art just keeps getting better and better. The back up story was a nice addition. It makes it feel as if we really got a bonus story in great issue. SUPERMAN/WONDER WOMAN is a comic fans of the superhero genre should not miss out on.

Really good issue I would think though if Clark wanted to know who Zod and Faora are he would just find Kara and ask her since she lived on Krypton.

Otherwise great book and I am loving all these tid bits we are seeing of Clark's and Diana's personal life's we need to see more of that in the new 52.

Is it me, or did Zod look like Ra Al Ghoul in some panels?

Almost every comic got 5 stars today.

It was very well written, mix with beautiful art.

Can't wait until the next issue ;)

@patrat18: If it makes you feel better, I bought 31 comics today. We not all of them are 5 stars. We don't review EVERYTHING. Take an actual look at what books got the five stars and it makes sense.

I love Lois Lane, but I have fallen "in-love" the Superman and WonderWoman relationship dynamic. I felt sad when I saw there was foreshadowing of their relationship eventually ending, in this issue. Maybe I just over read into it and it wont end for many years. Truly I hope people give it a real shot, because it is totally worth buying! :)

@g_man: Maybe you should start doing recommendations of the week rather than weekly reviews?

@patrat18: If it makes you feel better, I bought 31 comics today. We not all of them are 5 stars. We don't review EVERYTHING. Take an actual look at what books got the five stars and it makes sense.

I meant it in a positive way. Did you read constantine? I thought it was great.

There's this pain in my neck telling me that Zod is going to be pissed at Kal.

Faora... The queen is here

I love Hal's reaction to the breaking news. DIBSS!

I like how Lex was about to say he could never imagine this happening but he said he planned for it.

Didn't like how the main story was only 12 pages :/ but it was a great issue nonetheless.

@sandman_: yeah i was on that same wavelength

I only wish this issue was longer!!! I enjoy reading about these characters, and could read about them for hours, especially having someone like Charles Soule behind the writting, and Tony Daniel making wonders to the art.

I love how their was a good amount of time spent on developing the characters, even when the story was focus on Superman, and his kryptonian heritage, it still felt much like Wonder Woman was there. Maybe not visually, as mentally due to her narrating the complexity of their relationship, while story was going on.

The Duo between Charles Soule& Tony Daniel is a must READ ;)

this series is awesome

I hate how short the comics are, but I LOVE EVERYTHING ELSE about it. I am surprise no one mention the scene between Hal and Barry, and the one with Batman.

I thought the krrack might be the phantom zone lens

I hate how short the comics are, but I LOVE EVERYTHING ELSE about it. I am surprise no one mention the scene between Hal and Barry,the one with Lex in jail and the one with Batman.

@saint_wildcard: i was naming scenes that no one mentioned. You mention that scene.

Also I been getting the feeling that Clark might be ashamed of dating Diana, or it could be he is afraid that humans would distance themselves from him and really see him as a alien. IDK

@saint_wildcard: i was naming scenes that no one mentioned. You mention that scene.

Also I been getting the feeling that Clark might be ashamed of dating Diana, or it could be he is afraid that humans would distance themselves from him and really see him as a alien. IDK

I thought you meant in the review :D

He's not ashamed, he doesnt want her to get hurt by the media.

I do love how this Superman is a realist and not the annoying optimist he was pre-52. The way he didn't trust Zod and made a logical decision to imprison makes me want to start reading his books. Also when does wonder woman's friend make her new 52 debut?

@g_man: in Soviet Russia Superman has conversations with Clark lolol Just teasing though but there's a typo in there. Might have to buy this once it comes out in trade cause I just can't afford another book on weekly pull. Charles Soule is honestly murdering everything he's on(in a good way).

Best part of this was the introduction of Faora. This series is kind of losing me as a whole, tbh.

Another awesome issue, kinda bummed it was so short but it was substantial, deserves ever one of the 5*.

Liked this issue a great deal. Quick Question, gonna sound immature,in that first couple of pages did they just finish doing it? And Who ratted them out, I wanna know! and and Diana in regular clothes, mmmmmmmm.

Liked this issue a great deal. Quick Question, gonna sound immature,in that first couple of pages did they just finish doing it? And Who ratted them out, I wanna know! and and Diana in regular clothes, mmmmmmmm.

If not that at least they were snuggling, Clark is a gentleman, Best bet right now is Zod, but it could be anyone.

@saint_wildcard: Yeah thats what I was thinking. Not quite sure about Zod. Someone more one on one. feels like a twist coming up

@saint_wildcard: Yeah thats what I was thinking. Not quite sure about Zod. Someone more one on one. feels like a twist coming up

I know it's far fetched and only has like a 10% of being true. It has to be someone that knows Clark's identity, because they sent that info to Cat.

What was the deal with him taking out the tv cables? Would be cool if it was him who made SM/WW public.

Completely agree with the review. I loved this issue and the series as a whole is fast becoming one of my favourites.

By far my favorite issue in SM/WW title.

Diana’s pep-talk with Clark is powerful and then her interaction with little girls is touching. Zod appears to be charismatic and even, I would say, philosophic to some extent (plus he has brains, which is always plus in my book).

Soule managed to make this relationship something I can dig and enjoy.

My only concern so far lies in fight scenes. We got several of them so far, but they feel a little rushed. Di vs Doomsday, Supes vs Apollo, Supes vs Zod – we see beginning and then immediately jump to the end of battle. I hope that this is just preparation for big show-down in latest issues.

I wonder what this issue did wrong this time. Time to look up the synopses on the Internet for the full story on this issue. It's a shame great Superman villains like Zod and Faora are being reduced to appear in this panto of awful romance and poor characterisation that this series has become.

In this comic, Diana only auxiliary character.The main role in the comic plays Superman.

@lvenger: wow, you really hate this? Why not just ignore it?

@sandman_: I tend to follow most Superman appearances, force of habit and all that. I still follow Superior Spider-Man and I hate that even more than this. It would take Cyclops level hatred for me to just ignore those series. 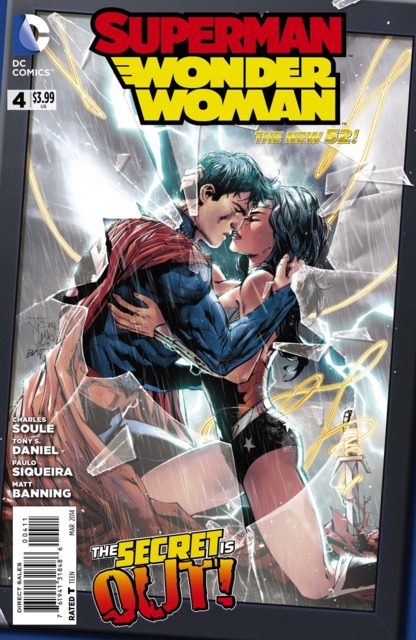