It's time for Zod to make his debut. What is he up to, and more importantly, can Superman and Wonder Woman hope to stop him?

DC knows a book focusing completely on Clark and Diana's developing relationship wouldn't win many people over, so the series compensates for that by having a whole lot of hectic and big action. However, with this chapter, writer Charles Soule takes a more humanizing approach to the key cast. Don't worry, Zod absolutely makes a badass introduction, but this issue is primarily character-driven instead of being punch-driven.

If you've been following along, then you know Big Blue received an enormous boost to his abilities in this last issue. While that delivered a jaw-dropping battle moment, Soule didn't take that direction just to make Superman look cool. The move carries over into this issue and produces a solid heart-to-heart between Batman and Kal. Wayne being so open may feel a bit out-of-character to some, but given what he's just observed, it's an understandable choice and ultimately presents a great message.

Tony S. Daniel and Tomeu Morey create an impressive looking issue. The character work and environments -- most notably Earth from a distance and the desert during a brawl -- are all solid and do a fine job setting the stage for each scene. Visually speaking, the standout scene is easily the conflict with Zod. There's some fantastic panels which superbly illustrate all of the emotions he's going through during the struggle. The look he gives Hawkman is as villainous as it gets, people. A few panels feel a tad rushed, but overall, your eyes will be pleased.

Diana's sentiment in the end is touching, but the road getting there is unfortunately not all that interesting. When we're dealing with the opening development, the introduction of Zod, and Superman recovering from the last issue's power boost, switching to what the holiday spirit is all about definitely weighs down the issue a bit. It's well-written, but when dealing with so much great material, I'd much rather see all of those factors get more time instead of the book adding a topical subplot.

The continuity still feels a bit odd with Zod (and Doomsday, but he's only talked about in this), especially when the book decides to cite Grant Morrison's ACTION COMICS -- a series where Kal went to the Phantom Zone and briefly met Zod (AC #13). With all of his resources, it's weird to think he's never even heard of the villain before.

Martian Manhunter fans won't be happy, either. The first attack is understandable, but then the powerhouse feels downplayed to help convey how powerful Zod is becoming.

Soule successfully moves the overall narrative forward while also throwing plenty of variables into the mix. There's a lot of buildup in this issue and you can definitely feel all of the factors circulating. The cliffhanger's something we've all seen coming a mile away, but everything else has me incredibly anxious to witness how it'll all play out. With Daniel on-board, we know it'll be a good looking ride, too.

Plus, after her awesomeness in Man of Steel, I can't wait to see how New 52 Faora will be utilized. 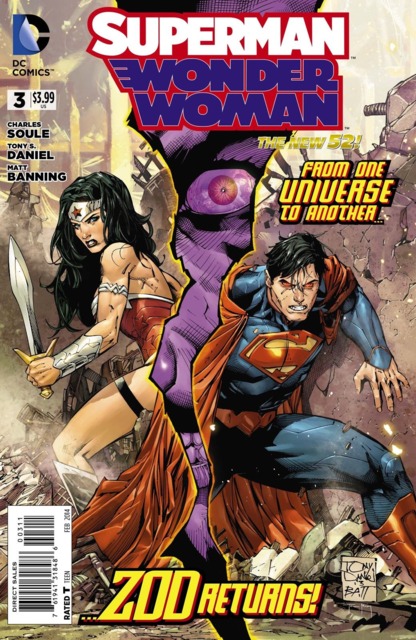