After that surprise appearance at the end of the first issue, what other troubles might Wonder Woman and Superman have to face?

We're only two issues into this series and Charles Soule and Tony Daniel have completely won me over. Superman and Wonder Woman are two great characters. Aside from the fact that they're an item, I'm much more interested in the dynamics and 'adventures' the two will face side by side.

Chances are you already know who showed up at the end of the first issue. Having Doomsday show up was a nice surprise. Seeing Wonder Woman face this character was really interesting. We also get to find out a little more about him and where he stands in the New 52. This provides an interesting twist.

A good porton of the issue deals with Superman meeting some of Wonder Woman's "family." Imagine what it can be like meeting your significant other's family. Then twist that a bit and crank up the craziness. The interactions provide Tony Daniel with a great opportunity to cut loose on the visuals. It's like Soule is combining the two characters titles and giving us exactly what we'd want to see in terms of conflict.

Tony Daniel's art does shine here, very brightly. You can see he's really giving it his all and it looks great. The colors by Tomeu Morey really give it all a nice sheen that makes the panels pop off the page.

If things weren't bad enough for these two, Soule gives us a crazy cliffhanger (that unfortunately was spoiled by the solicits).

This was a fun and gorgeous book. I really enjoyed it and can't wait for more. Nothing to complain about except how Doomsday relates to Superman's past. In ACTION COMICS, Grant Morrison alluded to Superman dying by Doomsday. That seems like something the world would know about yet Wonder Woman seemed unaware. It's not a huge deal for this story but makes you wonder how Superman's encounter with Doomsday played out.

Only two issues in and this series has now become one of my favorites. Superman and Wonder Woman make a great pair, at least in terms of starring in a comic together. This book is driven by the story and the fact that these two powerhouses are about to meet some really big threats. With subplots involving their separate supporting casts, it's easy to see where these characters are coming from and it's a nice way to tie this series into their separate titles. Tony Daniel is rocking it in the art department and the book has the big epic feel it deserves. With the facets of the story Soule is laying out and Daniel's art, I can't wait to read more. 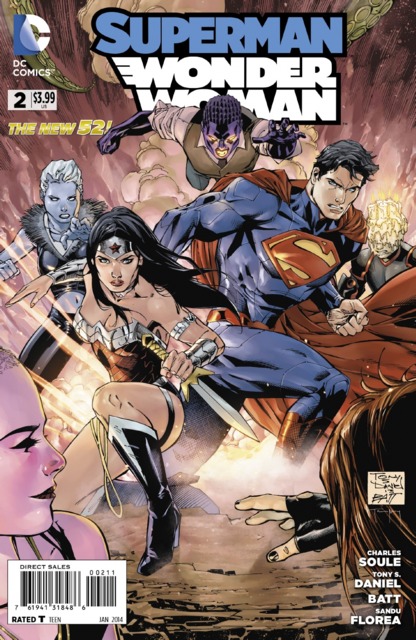