An upgraded Lois Lane takes on the God of War

Doomed continues to spell all kinds of trouble for Superman's world. With this week's chapter, writer Charles Soule addresses quite a few of the event's developments while also sharing a bit of insight into Kal-El. First and foremost -- and this comes as a double-edged sword -- the writer likely realizes not everyone is reading all of the chapters that appear in the various titles. Some readers may only follow specific titles and, if so, they've obviously missed out on some story progression in the other books. That means this one is as new reader friendly as it can get. Not only is there an extensive recap page, but we're told all of the basics as we jump from scene to scene. What's going on with Lois? How is this transformation affecting Superman, both physically and mentally? What the heck are Lana Lang and Steel doing in space? Soule's able to answer all of these questions while successfully taking decent steps with these elements, too. Even though a fair amount of dialogue may feel redundant for loyal readers, it's still able to move the event forward in an entertaining manner and, aside from one blatant bit of heavy exposition, the pacing remains solid. The issue leaves us on a legitimately interesting dilemma, too.

Paulo Siqueira (pencils), Pascal Alixe (pencils/inks), and Hi-Fi (colors) do a fine job presenting all of the characters, crazy special effects, and locations in engaging and even exciting ways. There's some pretty cool uses of perspective in there (love the one of SuperDoom looking at the reader over his shoulder) and Hi-Fi does an epic job handling all of the bright and impactful effects we're treated to. Whether they're explosions or a giant display of heat vision, it's all displayed in a very satisfying way.

Making sure this issue is as new reader friendly possible means there's a lot of noticeable exposition. One scene is essentially covering everything that's mentioned in the recap page, too.

I know a key element in this series is the relationship between Supes and Wonder Woman and I understand Lois' mind is being influenced, but the dialogue about their "men" felt somewhat forced. These are two characters who are strong and compelling because of who they are, not because of who they're currently with and the need to use that in an argument felt odd. Usually I like the drama surrounding the relationship in this series, but this felt a bit off and almost beneath Lois. I suppose we could chalk her reaction up to what's going on, but even before that she seemed to have control of her dialogue. It would have been more fitting if they were able to discuss the scenario in another way, but it's really not that big of a deal.

Minor gripe: the style for Lois Lane and Wonder Woman's dialogue boxes appear to be reversed in one panel (when Diana deflects an attack).

The focus on Clark and Diana's relationship feels a little forced and the need to appeal to new readers takes a wee bit of a toll, but despite that, SUPERMAN/WONDER WOMAN #10 still manages to be an interesting and entertaining addition to the Superman: Doomed event. Not only does it cover a heck of a lot of ground, but it also gives us just a little more insight into how Clark is coping with his latest dilemma. It's just enough to help us appreciate what he's going through and it's still able to generate hype for what's to come. I don't know about you, but I definitely want to see what follows after that cliffhanger. 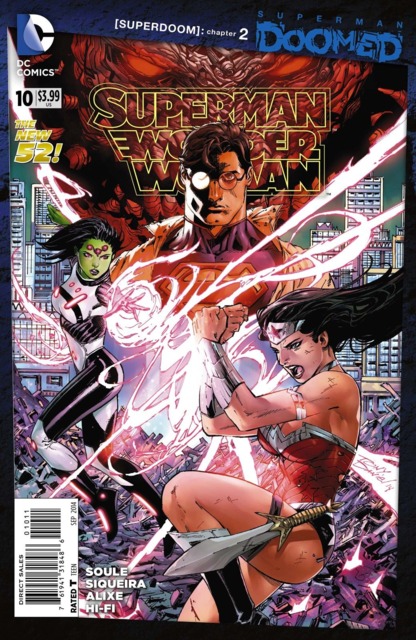