DC's "power couple" get their own title. Charles Soule and Tony Daniel prepare to show us a different side to the two and hopefully they'll survive long enough so we can see more.

There may be some that feel Superman and Wonder Woman should not be a couple. This is how some feel in real life and in the DC Universe. Where we stand in the New 52 timeline, both these characters are still developing and evolving. This is something that Charles Soule displays right away. Superman and Wonder Woman may have found some common ground to relate to each other and this is an opportunity to explore that.

What Soule does in the first issue is give us a little more on their personal lives. In their own titles, there is usually some crazy villains causing destruction or other distractions that take over the issue. Soule has stated that he does intend to include both their supporting casts. We see Clark working with Cat on their website. We see Wonder Woman training in London. These little moments show us that this isn't just going to be a series focusing on two superheroes dating.

Oh yeah, there's some big action taking place here. Soule mixes things up by jumping back and forth within the story. It's cool to see the mix between the two and you will be impressed with what happens in the action scenes.

Tony Daniel gives the story a great touch. His art really captures the emotion, action as well as the normal everyday scenes. This gives the story a more realistic feel. Superman often comes across as an overly stiff character. The same happens with Wonder Woman sometimes. Daniel's art makes them feel a little more human.

This is a set up issue. It's a great way to start. There may be new readers than need to catch up on this version of the two. While there is action, there are times when things slow down a bit. Again, this is important to flesh out the series and direction. It almost felt as if we had more pages of the two separated than together.

Superman and Wonder Woman are two of DC's greatest characters and we're finally getting a series devoted to the two together. Charles Soule gives a great mix of action, emotion and character development in this debut issue. It should convince you to stick around for more to come. Tony Daniel's art adds depth to the characters. His layouts make this feel completely different than the regular SUPERMAN or WONDER WOMAN comics yet it feels like this is how it was meant to be. While we do get a mix between the action and quiet times, you will be left hanging and hungering for more, especially when you get to the end. It's a glorious start and let's all cheer for DC's "power couple." 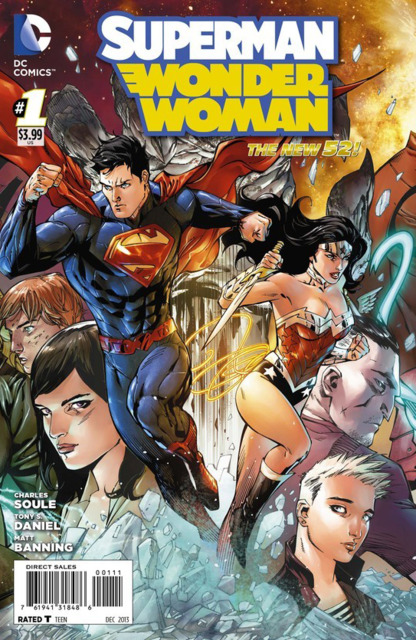