We want answers on the new character in the series and we get some. Superman will have his hands full with his new playmate and if that wasn't enough, Lex is on the loose as well.

In the last couple issues we saw hints and glimpses on a new powerful character. Batman even suspected this character was more powerful than Superman. The fact that he's at General Lane's top secret government instillation adds a great air of mystery to the story. The big question is, how much of a threat is this character to Superman? Let's just say we get some nice action scenes courtesy of Jim Lee here.

Aside from finding out more about the mystery character, this isn't the only part of the story. Scott Snyder puts Lois smack in the middle of her own crisis. It's not at the same level as what Superman is going through but there is something incredible about seeing Lois simply be put to the test on her own. She doesn't cry out for Superman to save her in the hopes his super-hearing will pick up her distress. She takes command of the situation and does everything she can. But will it be enough?

And if that wasn't enough, of course there's more on Lex and his…strange vehicle we saw last issue as well as more on Jimmy (courtesy of the backup with art by Dustin Nguyen).

Snyder gives Jim Lee plenty to work with. Even though this issue delivers a lot of answers and exposition on the new character, we do get plenty of big "Jim Lee action scenes" that drives the story and suspense along. Lee's depiction of Superman in action is great as are his scenes with Lois. Dustin Nguyen's style sets up the mood perfectly for whatever might be headed Jimmy's way.

It's spelled out why General Lane would be willing to give Superman some answers. It just seemed a little odd that, given the position he ended up in, he would cooperate with the Man of Steel. He was against the new character even given Superman his name yet later fils him in on the whole story.

I'm a little unclear what Lex's plan is. Unfortunately I can't help but wonder where his escape fits in with the current Trinity War. But maybe it's better not to worry about that "event" and simply enjoy this series.

This issue was a blast to read. It's not often we can see a new character more powerful than Superman and have it make sense. Scott Snyder is creating an interesting story with this new character and his take on the New 52 Superman fits nicely. With each issue, you can't help but want to see more of Snyder's take on Superman, Lois, Jimmy, Lex...and just everyone. This is a Superman story you can immerse yourself into. We have a new character and new threat. This series just feels so explosive. Scott Snyder, Jim Lee and Dustin Nguyen are making Superman so much fun to read. 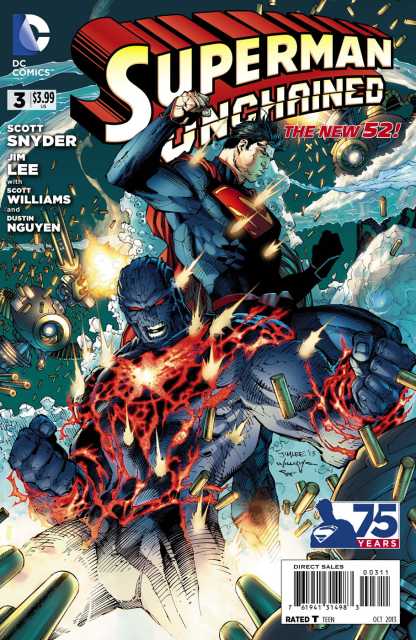