The Superman you remember from before is back, married, has a kid, and a new Earth to call home.

Dan Jurgen's CONVERGENCE SUPERMAN was one of my favorite Convergence titles. As fun as it has been getting to know the post-Flashpoint version in the New 52, this was a return to a more classic Superman many of us grew up with. Having Superman back with Lois Lane (and still married!) was fantastic. At the end of Convergence, they, along with their newborn son, went off to save another Earth and we weren't quite sure what their future would hold. Until now.

The biggest shocker is where they ended up. They are now on Earth-Prime. The opening pages show this Superman about to make his move when the New 52 Justice League was fighting Darkseid. Think about that. He's been around for the five plus years we've been reading about since 2011. This makes things more interesting that I imagined. Clark, Lois, and their son will have to tread carefully as they've, obviously, been living in hiding. How much longer can this last? There's a lot of potential here but the main thing is, we have our old Superman back. Will he interact with the other Superman? We've seen that before when the Kingdom Come Superman journeyed back in the previous JUSTICE SOCIETY OF AMERICA series.

The art by Lee Weeks and Scott Hanna and colors by Brad Anderson are great. You can immediately distinguish between the New 52 characters and the classic Superman and Lois. They feel like they're in their own little corner of the world while still fully integrated into the current DCU. The little changes such as Superman's beard or Lois' haircut are nice touches.

As this is the first issue in the new story, there is some set up that has to take place. This is necessary but does slow things down just a tad. Some of the dialogue is clearly to help guide us through the situations and obviously won't be necessary to this extent as the series moves forward. While there is a lot of potential, there is also the risk of things getting a little awkward or just falling flat. I trust Jurgens' plan, whatever it may be, but I'd be lying if I didn't say I was a tiny bit concerned what could happen if this Superman meets up with other heroes and villains.

If you've been enjoying the current Superman titles but still can't let go to the previous version we had, you absolutely need to check this series out. Dan Jurgens and Lee Weeks have brought back the Big Blue and it feels like it was just yesterday we were reading his adventures. While it is still Superman and we have been reading Superman comics since the New 52 change in 2011, there's a clear and different voice going on. Having him on Earth-Prime really opens the door for some potentially crazy stories. If you're a Superman fan, you owe it to yourself to read this book. 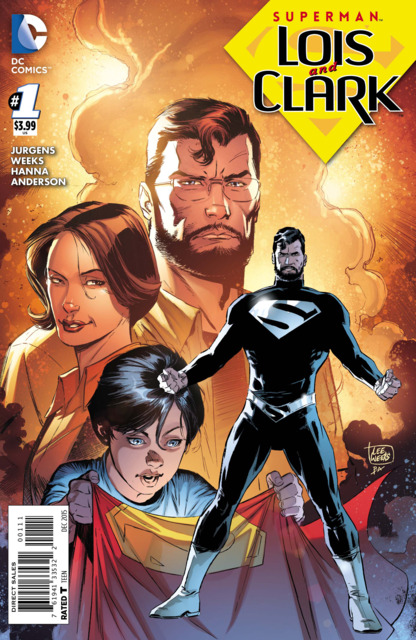