As Superior Spider-Man continues his struggle in Goblin Nation, he reflects on the time he teamed-up with Green Goblin.

As Superior Spider-Man fights to take the city back from the Goblin King's clutches, writer Kevin Shinick pulls us away from the event and brings us back in time to witness a villainous team-up between Doctor Octopus and Norman Osborn. Both have certainly earned their place as a Spider-Man villain and Shinick uses that to bring these two together. The objective is simple: team-up and destroy the wall crawler. Don't worry, the fact Otto didn't have the best experience ever with the Sinister Six is indeed brought up.

The writer brings a slightly comedic tone to the story and focuses on really bringing what makes each of them unique front and center. Otto's focus on science is really played up and Norman can lose his mind with the flip of a switch. Otto is used as the butt of a joke at least twice, and unless you're an absolutely die-hard fan of the character, odds are the gags will give you a decent laugh (loved the bit with the phone). Despite the bleak premise of these two evil minds joining forces to ruin someone's life, their alliance feels like it's straight out of the bronze age of comic books. They fight before agreeing to work together and there's even a double-splash page montage that feels like it should have "Wouldn't It Be Nice" by the Beach Boys playing in the background.

The art also fits the book's vibe very well. Marco Checchetto lends his talent for the first page and, while he isn't given much to work with (it picks up with the Spider Slayers holding Ock and Spider-Man 2099), he still provides a very good looking page. Ron Frenz's artwork, however, is what really sells the flashback's atmosphere. A couple of the layouts and perspectives used in panels feel just like something you'd see from a comic that's a few decades old. Little additions like the lightning striking behind Norman as he's revealed for the first time or the Goblin mask serving as his reflection are things we've seen so many times before but still manage to give the story a nice touch. Frenz nails the facial expressions and that's without question my visual highlight in this book. You can almost see the crazy in Norman's face and the expressions they make as they bicker or gleefully work together are great. Colorist Rachelle Rosenberg compliments Frenz's work with just the right amount of coloring. It's never overwhelming or hindering the pencils; it's just enough to give these moments a little more depth and offer bold colors when the moment calls for it.

Considering there's a huge event going on over in the pages of SUPERIOR SPIDER-MAN, it's a bit of a bummer this $3.99 per issue series doesn't have a stronger connection to it. Yes, it focuses on the two key players (that said, I have no idea if Norman is indeed the Goblin King... reading this before the latest SUPERIOR SPIDER-MAN), but it instead aims to reveal a backstory that, while entertaining, will seemingly have no lasting impact or even change the dynamic between these two (if my memory serves me right, we've already seen firsthand what Otto thinks of Norman in the present, after all). The cliffhanger also came off as overly dramatic and, to be blunt, doesn't have me emotionally connected to care nearly enough what the outcome will be for the character it involves. The moment almost feels like it could use the classic "dun dun dun" sound effect after Norman states his line. I get it's keeping in line with his unpredictable nature at that time and even the era's tone, but it felt a bit over the top to me.

SUPERIOR SPIDER-MAN #11 is an enjoyable trip into the past and has potential for a more serious and emotional second chapter. That said, I can't help but feel as though it doesn't do enough to make me really want to shell out $3.99 to see what happens next, especially when this comes off as a story that seemingly won't really change how we view either of these characters. It's by no means a bad issue, but I'd only recommend it to particularly big fans of these two Spider-Man villains. 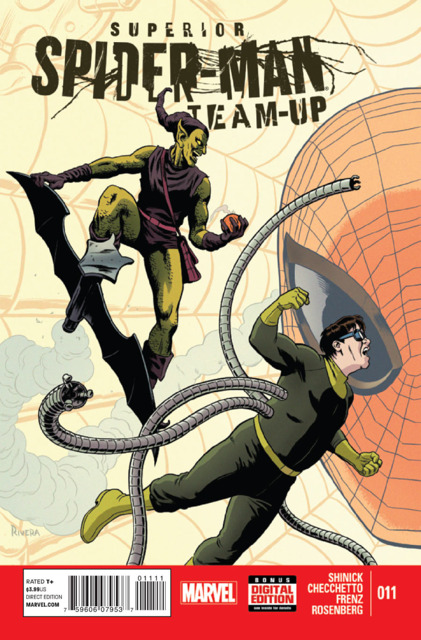