The end is near. Things aren't looking too good for SUPERIOR Spider-Man as his war against the Goblin Nation continues.

We all know what's coming. Soon Peter Parker will return as Spider-Man and this series will end, giving way to the return/relaunch of AMAZING SPIDER-MAN. The fun part is seeing how it's going to happen.

For months we've seen Doc Ock act as the SUPERIOR Spider-Man. He's taken on some new tactics and did do things that Spider-Man never could. But, of course, there was a price. And it just might now be time for Otto to pay it.

Dan Slott and Christos Gage fill the issue with more developments and repercussions and the story unfolds. What's going to happen to Spider-Man 2099? What about Jonah's decision to unleash untested Spider-Slayers on the city? What is the Green Goblin really up to? Who is going to live and who is going to die?!?

This has all be a grand adventure and, in many ways, it's going to be sad to see the series end. Dan Slott is setting things up so there will likely be plenty of threads carrying over into the new AMAZING SPIDER-MAN.

Giuseppe Camuncoli has his work cut out for him here. There is so much action he gets to draw. Seeing SpOck and Spider-Man 2099 fighting side by side is really cool. The mindscape scenes are pretty rad.

Suddenly things feel like they're moving a little quickly. SpOck has always been full of arrogance but in one particular area here (which I won't spoil), it feels like he gives up too quickly and easily. Part of me feels like it's a trick. It's understandable that after everything that's happened with his fight against the Goblin, he feels he has no choice. It's just a bit of a 180 and almost feels too easy for what has to happen next. Obviously there is still more to see.

The end may be near for SUPERIOR SPIDER-MAN but the fight against the Goblins is far from it. Dan Slott is moving SpOck's story towards its end and you can't help but wonder if we'll be seeing more twists along the way. You will be glued to each page but one big development almost feels like it happens too quickly. This is something we'll have to wait until next month to see how it all plays out. You won't want to miss this issue. This is a big moment for Spider-Man and Doc Ock. This series keeps putting a smile on my face with each issue. 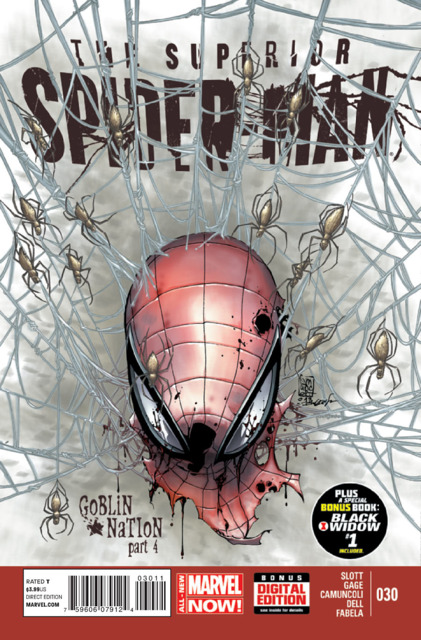