Spider-Man goes on the hunt for Hobgoblin.

The Hobgoblin is going on a robbery spree, in order to pay for his tech, but he's somehow evading all of Spider-Man's surveillance.

There's one overall moment that really sticks out to me in this issue. It's a two page spread with numerous panels, none of which have defined borders. It shows Hobgoblin robing a few places successfully, and below is Spider-Man becoming increasingly frustrated that he can't find him. What I love about this is a little piece of dialogue that Hobgoblin says "Since when did being a bad guy become a job?" It gave me a new look at why villains are villains. In this particular case, Hobgoblin is robbing banks simply to continue being Hobgoblin, which isn't cheap. Writer Dan Slott gives us these little moments where we have to redefine the characters and their motivations. This is truly what this whole series has been about. I really enjoyed the heavy focus on Phil Urich AKA The Hobgoblin here.

Although it was very brief, the relationship between Anna and Peter was another one of my favorite things about this issue. As you can tell, I have a few favorite things. She really sticks her neck out for Peter, and it seems like Peter has real feelings for her as well. That jerky, stubborn side of Peter is gone while he's around Anna. He really lets his guard down, and I love seeing this side of the character.

As always, I truly enjoy Humberto Ramos' art on this book. The over-exaggerated style really fits Slott's writing style, which teeters much more towards the fun side of things, even when the stories get a bit dark. I love how he draws Spider-Man as well as Hobgoblin in this issue. Their fight scenes are incredibly cool looking.

I loved the ending to the issue, and it's going to change a lot in Spider-Man's world because it's the first time, that I know of that Spider-Man publicly called out a villain and gave away his secret identity. I can only wonder how the public is going to react in the next issue.

I'm a little disturbed with how tapped into everything Spider-Man is, especially with being able to take over airwaves with such ease. More than anything else, why isn't anyone stopping him from doing this? In addition, SM is up to some crazy stuff, like destroying Shadowland, and most people are just sitting back, idly and watching it happen. There's no repercussions for his actions. It's a big aggravating.

Another fun issue of SUPERIOR SPIDER-MAN. Slott and Ramos continue to deliver something different and something incredibly fun. I've been digging the new take on this character since the series started. I am not the biggest fan that everyone is just letting SSM get away with this mass destruction and taking over the airwaves. However, there's a lot to love about the book overall. This is a book you should really pick up. 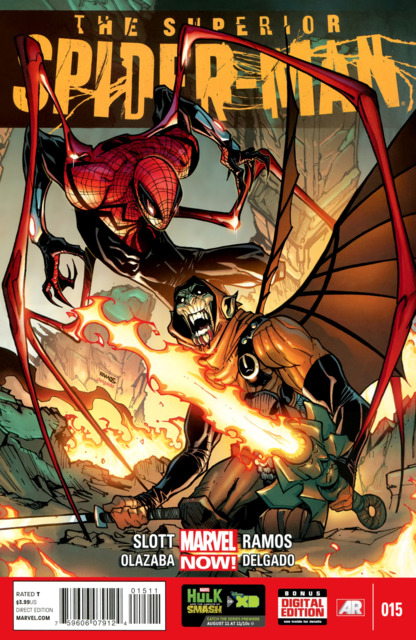