Superior Spider-Man #13 - No Escape Part Three: The Slayers & The Slain

We've seen "Superior" Spider-Man do lots of things. It turns out there's still more he's willing to do to accomplish his goals.

Otto Octavius continues his tenure as "Spider-Man." We're seeing many levels of extremes in this latest story. Being at the Raft to ensure the execution of Alistair Smythe would happen without a hitch. He was wrong. Smythe managed to push Octavius' preparations to the limit. We practically get a full scale war between the two. There will be casualties and we will see more of how far Octavius will go in this role.

It's more than evident that this isn't the Spider-Man we used to know. It's not supposed to be. That adds a big level of the unknown. We don't know how far Octavius is willing to go and it makes a frantic and fascinating story. (And yes, deep down I still feel assured Peter will eventually return).

Camuncoli's art is superb. There's a lot of action flying around and many characters present. You'll want to make sure you pause during the fast-paced story to be able to take it all in and appreciate it.

It's a blast following along with Slott's story. He is still throwing curveballs our way. The surprises keep coming and you just have no idea what's going to happen next.

It's easy to get into the story but you still have that lingering feeling that this shouldn't be happening. That's not a knock against the story. Perhaps it's the nature of the story, doing what it's supposed to be doing, that creates the feeling of uneasiness in the pit of your stomach. Octavius is taking "Spider-Man" further and further away. With what he sets up for himself at the end, while it is interesting, it's hard to tell what it will do the story we've been enjoying.

The events here feel a little as if they get wrapped up too quickly. It's likely better this way rather than it fill up another issue. It just felt as if the tables turned too quickly and easily.

Is everyone over the fact that this isn't the Spider-Man they knew before? Dan Slott continues to charge up the direction he's taking the character. We still have that deep sense of the unknown since this is essentially a different character that we're used to. Being able to overlook the past is vital to enjoying this science experiment of a story. You can't help but sit back in wonder over the extremes that Octavius is willing to take his role as Spider-Man. Action, suspense and surprises. These are great things to have in a comic. Dan Slott never ceases to amaze me. 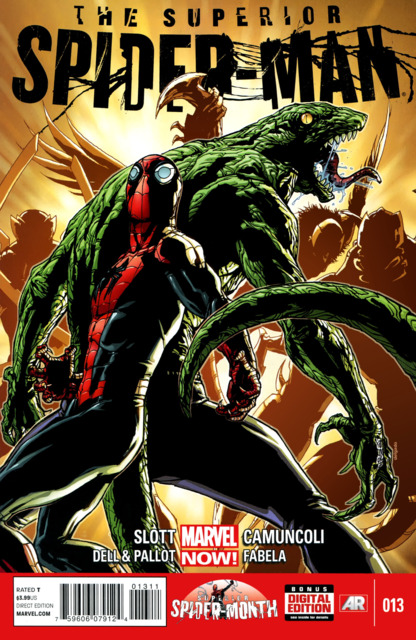