Boomerang has a new parole officer. Can he get on the straight-and-narrow, or will he continue to not care about going straight?...the answer may surprise you! But it’s no.

Nick Spencer’s already proven himself more than capable of keeping it serious with the espionage adventures of Secret Avengers, but Superior Foes of Spider-Man proves the man’s got a good handle on humor as well. Boomerang and his newly formed Sinister Six (which has only five members, because keeping the sixth a “mystery” will make them even MORE feared!) have yet to catch a break in their criminal escapades, but the laughs have been plentiful, particularly with the ironic title. Boomerang has to be closely monitored by his new parole officer Abner Jenkins, former Beatle/Thunderbolts founding member/current Mach-7. There are so many laughs to be had from cover-to-cover of this issue, between Boomerang’s recounting of Cyborg Silvermane to a Supervillain’s Anonymous meeting. The conclusion is, of course, the funniest part but the build up to that conclusion was so well orchestrated and plotted out that you can definitely tell Spencer is bringing some of those Secret Avengers chops to the table.

Steve Lieber is on lines with Rachelle Rosenberg on colors and the art in this book is absolutely perfect for the tone. Everything’s a little bit muted, a little bit flushed, a little bit threadbare, but it matches the banality of Fred Meyers’ existence perfectly. The art is very down-to-earth and subtle, the lines are perfect and clean, the colors don’t quite leap off the page, but if they did, it would be disingenuous to the story. The facial expressions are the only things that are over-the-top, but it adds tremendously to the humor of the various situations. It’s also interesting to note that we rarely get to see Shocker without his mask on and they’ve actually fairly realistically aged him! I don’t know why, but this stuck out a great deal to me as equal parts fascinating and tragic as he appears to be in his mid-40s dressed like a quilting project gone horribly wrong.

The first several pages of this story are a recap of what happened to Silvermane. On its face, that’s fine, but at least five pages are dedicated to a hypothetical situation that turns out to be completely incorrect. I get that it’s in service of a fairly funny pay-off, but it felt like there could have/should have been a greater economy to the storytelling in this part. Then there’s an entire retelling of Abner Jenkins’ career in the middle of the book that goes on for several pages, and of course it’s good to get readers caught up, but this is a little ridiculous. Nearly half of this book is flashback or exposition.

Exposition it may be, but it is HIGHLY entertaining exposition and this is, ultimately, a book where not a lot happens, so it isn’t like we missed out on some giant, cosmic battle for the fate of the world. Still, the pacing still suffers to some extent and I’d have liked to see more of Abner and Fred interacting in the present. The book is still great enough to be easily recommendable to anyone looking to brighten the mood of the often grim and grimy comics that regularly line the shelf. This one’s close to the street, but it’s got a lot of heart and a whole lotta laughs and, as I said last week, it’s always a treat to see how the other side of the law lives in a superhero universe. 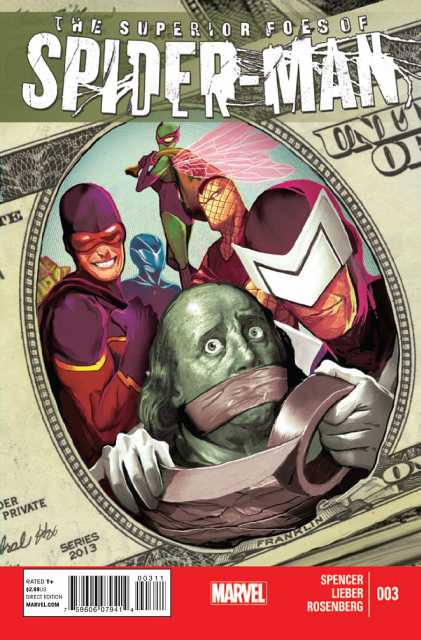