Did you want to know Overdrive's origin story? No? Well, too bad. Nick Spencer, Steve Lieber, Rich Ellis, and Rachelle Rosenberg give readers one heck of an uneventful origin that is downright hilarious.

I'm sure those opening lines sounded really mean. However, it's meant in the best way. Overdrive's origin is well, the least interesting origin story I've read in quite some time, but that's really the charm of this whole story. Everyone expects a villain's origin to be full of revelations and epic moments that shaped the person they are now. With Overdrive, he's a race car driver that wants to eventually become a hero, so he can hang out with the Avengers. It's a bit sad, but it really shows how much heart this character has.

This issue is 100% non-stop fun. In fact, the whole series is. Nick Spencer writes a fun series with characters most folks don't even care about. It's nice to see they have a home in such an amazing book. Lieber, Ellis, and Rosenberg provide art that molds well with the writing. It's zany, fun, and has cartoonish elements to it. Everything about this series is the best.

One of the best moments here is the two page spread which we'll call "Overdrive's How to Guide." It's fun and silly and a nice little way to present an action sequence in a whole new way. This is something I love about this series. This creative team is always presenting stuff to the reader in a whole new light.

Little to nothing bad about this issue. It's exactly what you'd expect, month after month.

SUPERIOR FOES OF SPIDER-MAN is the cat's pajamas. The story inches forward, but we're getting to know a little bit more about Overdrive and his relationship with the rest of the team. I laughed a lot during this issue. It's easily one of the funnest reads each month. Pick this up in trade and catch up. It's easily the best on-going series about Spider-Man B-list villains ever made. However, I can't think of too many others. Anyway, I highly recommend this issue. 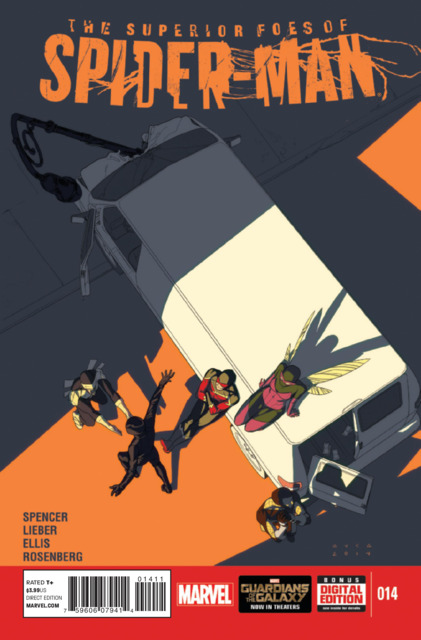