Carnage is locked safely behind bars, but can any prison hold one of the Marvel Universe’s most dangerous psychopaths?

Zeb Wells and Clayton Crain left one helluva mark when they took one of Marvel’s most one-dimensional, dull villains (Bendis even claims he had him torn in half at the beginning of New Avengers because of what he represented in terms of comics) and turned him into a genuinely terrifying force of evil and malice, one of shocking power and depravity. So a new creative team picking up where they left off had their work cut out for them, but Kevin Shinick and Stephen Segovia seem to be up to the task, even if their first effort is a little by-the-numbers. The issue picks up being narrated by a new inmate in an undisclosed metahuman prison. Since the Raft’s closure, apparently there’s been a prison overcrowding problem, so while our narrator has no powers to prop him up, he finds himself surrounded by admitted B-listers, but B-listers who are still super strong and/or indestructible. When Cletus Kasady, comatose after a dose of Scarlet Spider’s paralytic poison, is wheeled in, things quickly degenerate from bad to worse. A quick round of mind control from a source I won’t name, and suddenly Carnage is back and on the loose, but without even Kasady's twisted desires to keep the raging symbiote grounded.

I like how the characters in this book are written, the mastermind behind the plot makes sense (even if the plot itself isn’t quite foolproof) and the dialog is well-realized and characterizes the fear that must come with being in a situation like this well. Carnage has been a true force for terror and evil ever since his return and reappearance in Carnage USA and Minimum Carnage, so it’s interesting to get the voice of an outsider, someone with no powers nor a stake in what’s going on. Needless to say, our less-than-intrepid narrator doesn’t last very long, but he’s nice to have as an introduction to potential new, or unfamiliar readers.

Stephen Segovia’s pencils and inks, along with Jay David Ramos’ colors, are very reminiscent of Stefano Caselli’s without being too directly derivative, and if there’s anyone to be similar to with a book I’m reviewing, it’s Caselli. The characters are cleanly defined, the action is brutal and tweaks something directly in the gut, particularly the panel on which the narrator is dispatched. Once you realize what’s ACTUALLY happening, it’s a very stomach-turning event, but it’s far from the only notable one. Carnage himself has adopted a somewhat new look in the wake of the ubiquitous Maximum Carnage, a much more sinewy, skinless appearance and I like it. It makes the horror of what he is more apparent as there’s nothing about a character like Carnage that should be subtle, this is a case where more is definitely MORE.

This book is somewhat rote and by the numbers, and not just because it relies on the people guarding superhuman monsters to not only be bottomlessly stupid but to have absolutely no contingency plans. I get that security on these kinds of facilities has been reduced to LITERAL jokes at this point, but it’s a little tough to believe when we’re actually treated to these escape attempts and how easy they are in a world where things like mind-control, possession or even good old-fashioned blackmail are SO ubiquitous. The book is definitely an issue that sets up bigger and better things happening in the future, but judges on its own merits, very little actually happens.

It feels strange to criticize a #1 issue for being too introductory, but this issue manages. I don’t want to harp on that fact too much though, as it’s still a great issue and well worth reading if, for no other reason, than to see villains try to tame the savage beast that Carnage has become. The final page even makes a villain who is C-list at best look threatening, menacing and a powerhouse villain, so that deserves some definite credit. I’m very, very interested in seeing where this book is going. 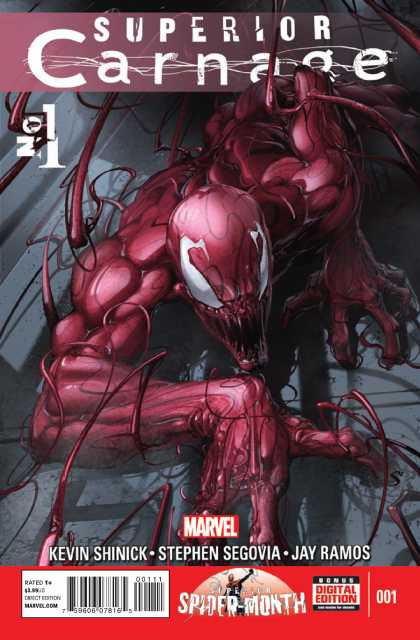