Supergirl is determined to get her powers back and has gone to the D.E.O. for help.

Supergirl is back. She hasn't had too many appearances since her series ended and she spent time as a Red Lantern. With Rebirth underway, Kara is getting a new series and direction. Supergirl's powers were a little wonky and she sought out help from the D.E.O. (Department of Extra-Normal Operations). Joining Supergirl's supporting cast is Cameron Chase along with Agents Eliza and Jeremiah Danvers, Kara's foster parents.

A lot of the recent Rebirth issues have struggled with finding the balance between delivering a story for both new and returning readers. The focus has leaned more towards retelling everything that's happened up until this point. Steve Orlando doesn't pound us over the head with stuff we've just seen. The advantage is that Supergirl has been sort of missing in action lately. We get a story that jumps right into the thick of things. Supergirl is trying to get her powers back, we're introduced to the supporting cast, and a new threat emerges for everyone to deal with. Orlando does a fantastic job intruding us to the characters and setting while also delivering plenty of action.

Emanuela Lupacchino's pencils with Ray McCarthy's inks and Michael Atiyeh's colors fits the title nicely. I wasn't the biggest fan of Supergirl's New 52 costume and welcome the return to a more classic look. Seeing Kara's foster parents and her new civilian guise has me intrigued. I can't wait to see more of this new aspect explored further.

As much as I enjoyed the designs of the main character, the look of the threat in this issue didn't sit too well with me. There are some elements to the character that made me scratch my head a little. It'll be interesting to see what happens next with him. You can't deny the vibe of the television show being presented here. It is easy to accept and doesn't feel too forced since Orlando is giving the book and the characters his voice. The pacing towards the end of the issue felt a little rushed. At the same time, it does leave you hungry for more.

It feels like it's been a while since we had an ongoing Supergirl series. Kara Zor-El is back and Steve Orlando and Emanuela Lupacchino have made it worth the wait. We're off to a good start as we're introduced a new supporting cast and direction for Supergirl. Similar to other Rebirth issues, there is some set up for the series. Thankfully, this book contains plenty of action and build up in order to appeal to both new and older readers. Looks like it's time to make room on your comic pull list for another new title. 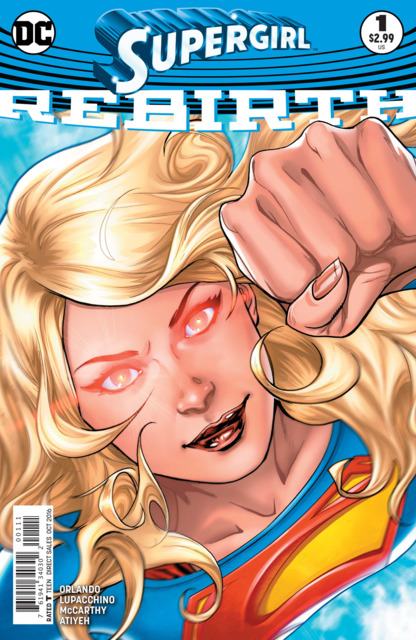