Cyborg Superman’s origins have been revealed, but can he save I’noxia or Supergirl? And does she even NEED saving at this point?

Michael Alan Nelson continues to write one of the best Supergirl comics in a very long time, and while I was initially worried that this Supergirl comic would contain very little Supergirl after issue 23’s cliffhanger, Kara’s still here and still in full, or even greater, effect. The Kryptonian Formerly Known as Cyborg Superman is horrified by what he’s done and immediately commences reversing the process and returning Supergirl's consciousness to her body, but not before Brainiac arrives, demanding Kara’s body to study the effects of kryptonite poisoning. Kara, though, is far from helpless and has designs of her own on the cyborg. This is an issue crammed full of content, from the tragedy of the revelations to the no-win solutions, everything is intense and very, very well paced, giving us a story that is brief in all the best ways.

Diogenes Neves returns on pencils (though you’d never know based on the solicitations) and absolutely knocks it out of the park. There’s so much action on every page, but it never feels uncontrolled or scattershot, everything is laser-focused and flows naturally from one panel to the next. A great deal of credit for that has to go to Marc Deering for his sharp, crisp inks and Guy Major (busy week for him!) bringing a distinctly different selection of colors from Batwoman. Knowing the same person colored both of those issues is jaw-dropping as I’d have never guessed it with these popping, vibrant backgrounds and characters. There’s an especially impressive two-page spread of Supergirl bursting out of the planet, and everything on those pages works together marvelously.

There are some parts where I lose the thread of exactly what’s happening. The imagine I mentioned above is amazing, but it represents a problem I had with the central narrative and that is not entirely understanding why Kara wants so badly to return to her body and kill Cyborg Superman, to the extent that she’d obliterate a planet to do it. She has enormous power, free will and all her memories, so I’m not sure why she can’t just give it a few minutes, work with Delacore to defend I’noxia, and THEN get everything straightened out. It’s possible the new form overwhelmed her rational mind and all she can see is vengeance, but some clarification would have helped as it reads a LITTLE too much like her behaving that way because the story demands it. As I implied above, the solicitations, even online ones, continue to list Mahmud Asrar as the artist on the book, and even though Neves does a fantastic job, it bears mentioning.

The complaint is a slight one and doesn’t stop the character from remaining as well-written as she’s ever been, striking out and forging her own, distinct, path for herself, away from her more well-known cousin. That’s been the true joy of Nelson’s (admittedly short) run so far: watching Kara forge her own identity. There’s a shake-up in the mix soon, so I hope it’s a trend that continues, but for now, this is an excellent issue to end an arc on. 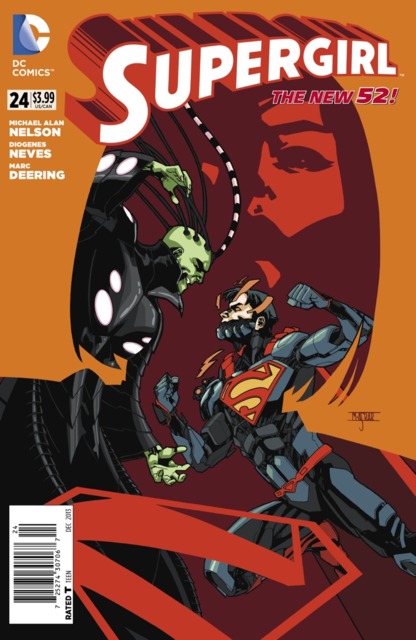