Supergirl #1 - Reign of the Cyborg Superman: Part One

Supergirl continues trying to adjust to her new life on Earth with the DEO and the Danvers.

Steve Orlando has brought hope back to Supergirl. Since Kara Zor-El arrived on Earth during the New 52 relaunch, she went down a dark path. She never really had a chance to connect with anyone, her cousin, Superman, included. All that is changing under the Rebirth banner.

Despite there being a Rebirth issue, this first issue in the series is a great introduction for new and returning Supergirl readers. Orlando is redefining who Kara is. We get some nice insight into what life was like for her on Krypton, and we get to see how she tries to adjust to the life of a normal teenager with new parents. As the groundwork is laid out for the series, readers will be captivated in seeing who Supergirl is even though we don't have a lot of super-action in this issue. With a new civilian identity to get used to, we get to watch Kara take on some new ground.

Brian Ching's art and Michael Atiyeh's colors capture the essence of this new direction for Supergirl. Kara's youth, hopefulness, and determination are well illustrated. You can see the innocence of a confused teen mixed with the confidence of having been a hero for months.

Cameron Chase's place within the title will take some getting used to. She's the one in charge at the DEO, and it is a little weird seeing her barking orders and reprimanding Supergirl. Of course that adds some more tension to to the title as well as helping to give Kara some direction. As the series continues, it'll be interesting to see what the balance between Kara's time at school and her superhero activities with the DEO will be. The book could easily slip into some teenage hero clichés, but it's more likely that Orlando will avoid most of those. It was mentioned she only has months of experience on Earth. The New 52 issues feel longer than that.

Supergirl is the breath of fresh air we've been waiting for in the DC Universe. Steve Orlando is brilliantly capturing the core essence of her character while building upon what has already happened within the New 52 stories. Brian Ching's art and Michael Atiyeh's colors are a perfect fit as well. Regardless if you're new to Supergirl's world or a long time reader, this is a great place to dive in. You can feel the hope Supergirl's character should inspire. Supergirl is also a less experienced hero than Superman. This gives us a great way to see her develop into an even better hero. 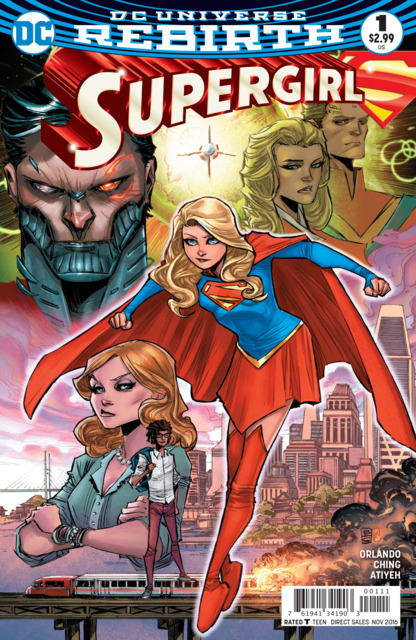