Kot's take on Deadshot is legendary and his Harley Quinn is lovably obnoxious. He's taken a book I dropped due to a lack of interest and boosted its quality approximately a gazillion percent. The team is heading in an awesome direction and the changes implemented makes me want more and more by the time I'm done with the issue.

It has yet to be revealed who hacked the system and let Harley Quinn free Deadshot, but the results of the mysterious person's actions were terrific. Like I said above, it gives Deadshot a great chance to shine and the violent result is a blast. At first, I thought the structure of beginning and ending in the future was a bit odd, but after thinking about it for a bit, I kind of dig seeing the aftermath of the deal before witnessing how it comes to fruition. Ultimately, it'll boil down to how well Kot balances the two time periods -- assuming he continues to use that strategy, of course. Besides, if it means I can see King Shark gnawing away at a gigantic achilles tendon, then I'm in.

Zircher's art is unparalleled. It's highly detailed and uses just the right amounts of shading to give these characters the dark and twisted look they deserve. It's pretty much the best and most fitting visuals a book like this could ask for. There's some enjoyable panel layouts and there's one instance where Quinn looks downright sinister -- it's quite cool.

I'm by no means an expert on the character, but having Cheetah with a massive mini-gun just feels off to me. She's a powerhouse and therefore I imagine she wouldn't really need one. I mean, a few months ago she was wrecking the Justice League completely unarmed and it's all thanks to her physicals.

Issue 21 is fantastic and deliciously dark. After just two issues with the new creative team, SUICIDE SQUAD has become one of DC's most enthralling titles. Kot has a solid grip on the characters' unique voices and manages to deliver just the right dose of crazy fun action and, of course, mystery. Throw in Zircher's insanely good art and you're looking at a book with a whole lot of potential. 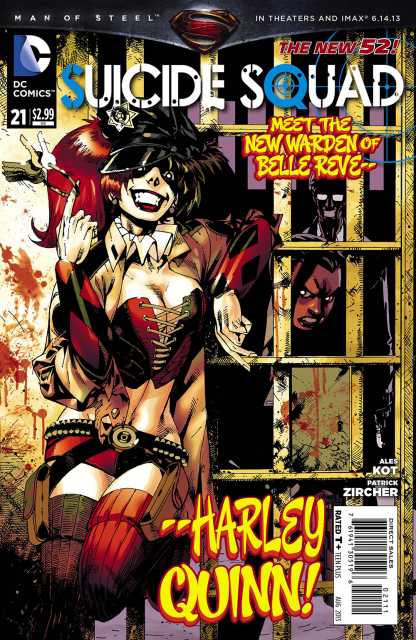