Suicide Squad #1 - The Black Vault Part One: I Wanna Be Sedated

A team of villains comes together to complete impossible tasks.

Suicide Squad is here. Amanda Waller puts together a familiar team of villains in order to find a cosmic item that landed in Siberia.

After seeing Suicide Squad, it makes sense to make a comic that has the same feel of the film, one that's inspired by the big screen take. That's fine and sometimes, it works exceptionally well. However, the new Suicide Squad book feels a tad too familiar for those who saw the movie.

Readers are presented with the same Task Force X they saw in the film, which is perfectly fine. However, because the film is so fresh in our minds, the team coming together, which happens quickly, feels a bit redundant, and by the time the first part of the story gets to a point where things are shaken up and everything is starting to get interesting, the story is over. It's great to see Jim Lee doing art again, with Scott Williams on inks and Alex Sinclair on color. However, because this is such a short story, it's a bit of a bummer and incredibly disappointing.

At the same time, the backup story is pretty fantastic, even though the overall story takes moments from the recent film. It follows Deadshot going on a mission to kill someone, in order to save his daughter. We won't go any further into that. It's something that we saw in the film, but there's just enough changed to make it fun and interesting. In addition, there is some amazing art from Jason Fabok, with Brad Anderson on colors.

Suicide Squad was something I was pretty excited about, considering the creative team behind it; however, the first issue just feels like it pulls way too much from the movie, and it doesn't have a voice of its own yet, which is a major bummer since Rob Williams has been turning out some great work at DC. The first story ends as soon as it starts to get interesting. There's a disconnect between the two stories.

Suicide Squad not bad by any means, but for people that were excited for this book, it's disappointing this didn't reach the bar. Hopefully, as this book continues, it can get a bit more out of the shadow of the film and become its own series. There's a lot of potential here, but the first issue just doesn't grab the reader the way it should, considering the talent that is on this book. 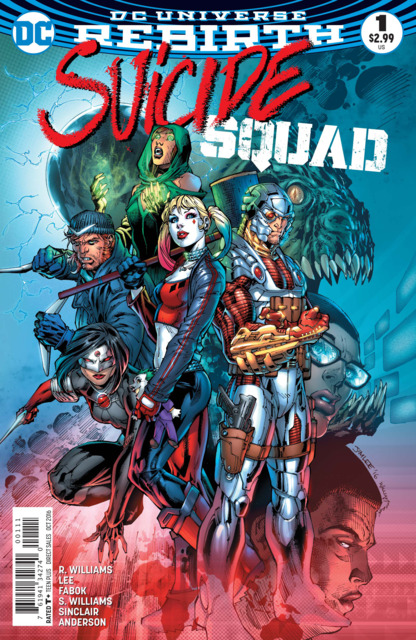