Duke was once an intergalactic hero. Now, he's an old man back on Earth.

For fans of classic science fiction serials like Flash Gordon, this will feel like home. STARLIGHT is essentially the continuation of all those old series. It's a look at what happens to a character like Flash Gordon, years after the adventure has ended. How does a character adapt back to the regular world after fighting bad guys across the galaxy?

As far as the story goes, it's an amazing idea, which builds off something that most readers are familiar with. Sure, younger readers may not get the context, but this book really isn't for them. It's much more for an adult audience dealing with growing older and feeling out of place in a world that doesn't take you seriously. Writer Mark Millar wraps all of this up into a pretty compelling story that really keeps the reader invested the whole issue.

Instead of just focusing on the present, Millar takes his main character, Duke into the past. The way the story is presented to the reader is very interesting. The reader is treated to the present day with flashbacks to Duke's stellar past and flashbacks to moments with his recently passed wife. We really get a full scope of who this character is now and who he was in his past life, all in this first issue. As first issues go, it gives the reader everything they need and a whole lot more, without it feeling jam-packed with expositional dialogue.

Artist Goran Parlov's style gives this book a fantasy feel with a bit of grit. His character designs are fantastic and really ground, while the color work gives this book more of the fantasy feel because of the brightness and more flat colors instead of shading them together. This art really fits well with Millar's writing.

We live in a world of coincidences, and this book happens to fall into one. The first issue reads a lot like the first few issues of the current volume of NOVA, except this book is from the father's perspective. This book is very obviously going in a very different direction though so don't let this whole comparison thing get you down. The really is no good or bad about this, but those who are reading NOVA may feel like that they've done this dance before.

The book really spends a good amount of time really beating down the main character, Duke, while setting up the world around him. Understandably, there are people in the world who are beaten down like this and nothing is really going good for them, but this first issue goes into over-drive letting the reader know that Duke's life sucks.

Overall, this is a great start to a new series that will have you clamoring for more. The concept here is really cool and Millar has a hit on his hands. While the issue spends a bit too much time beating down Duke, Millar does a phenomenal job at setting all of this up and giving the reader a dynamite first issue which will undoubtedly become an amazing series. If you're a fan of sci-fi serials, this is a must have book. 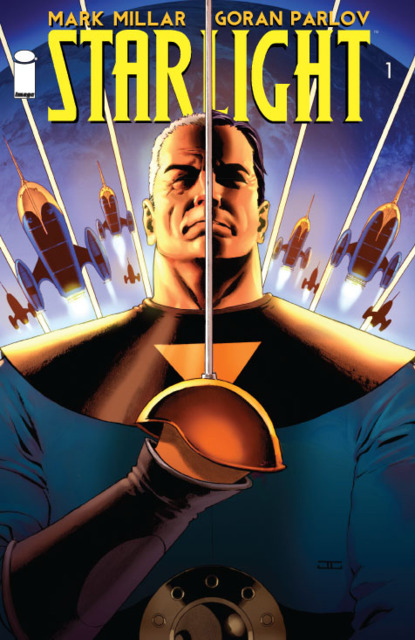