This second chapter is all about delivering a couple of interesting developments. Sure, there's explosions, blasters and dismemberment (it is Star Wars, after all), but the real highlight here is the way the plot moves forward. Once all is said and done, you're definitely going to be thinking about the upcoming issue and what it means for several of the characters. Yes, we know the ultimately fate for some of them (e.g. Grievous/Dooku are basically safe), but that hardly means they won't be subjected to some very interesting dilemmas.

The artwork -- Juan Frigeri's pencils, Mauro Vargas' inks, and Wes Dzioba's colors -- are consistently serviceable. I'm a big fan of how they convey General Grievous and everything from the spaceships to the city being bombarded looks good. Obviously, the more crowded panels take a bit of a hit when it comes to individual details, but the sheer amount of characters and vehicles which sometimes fill these panels makes up for it. Even mere glimpses of a giant space battle feel appropriately cinematic.

Despite Darth Maul being the title character, this limited series hasn't really focused too much on his personality. This issue mostly provides a look at his abilities as a tactician, but there's also a somewhat subtle insight into relationship with Mother Talzin. He's often shown as a cold and stern villain, so it's nice to see this softer side shine through just a little bit. It's by no means enough to take away from his villainous personality, but it's just enough to imply he isn't as one-dimensional as some may think. The art team also does a great job handling his face during these more vulnerable moments.

This is a chapter where a lot of exciting things occur, but we never get to fully appreciate any of the thrilling events. Instead, we jump between scenes and before we can really dive into what's going on, we're taken to another scene. For example, Dooku taking on the Nightbrothers has the potential to be gripping and full of great choreography. Instead, we only get glimpses of it. On top of that, a fair portion of this issue is spent talking about what'll happen before it does. It began to feel a little too heavy-handed as we witnessed both sides discussing their plans. It's basically a lot of build-up and then the actual event is just okay (again, because it leaps between 3 different scenes without making any truly standout).

Personal gripe: hopefully we'll get to eventually see a proper Maul vs. Grievous encounter. Needless to say, it was disappointing to see how swiftly that was resolved. I can't help but feel like time spent watching random troops could have been dedicated to giving this encounter more time.

Minor art gripe: Count Dooku doesn't quite look right -- it's all in the eyes and facial structure.

STAR WARS: DARTH MAUL - SON OF DATHOMIR incorporates a great cast of characters and has the privilege of following-up a very exciting storyline from the animated series. Unfortunately, this second chapter's events feel mostly forgettable and instead leave us wondering what'll happen in the next chapter. It essentially feels like it's going through the motions to move the plot forward. There's most definitely some interesting developments and I'm anxious to see what'll happen next (how could I not be?), but the execution of everything feels somewhat generic. It's not bad and the artwork is consistent, but despite all of the events, nothing here really leaves a lasting impact. It's a shame because there's so much potential here. Still, you can't help but love diving back into the evil side of this universe and, even if the action scenes are short-lived, it's still pretty enjoyable while it lasts. Hopefully the next issue will be more engaging! 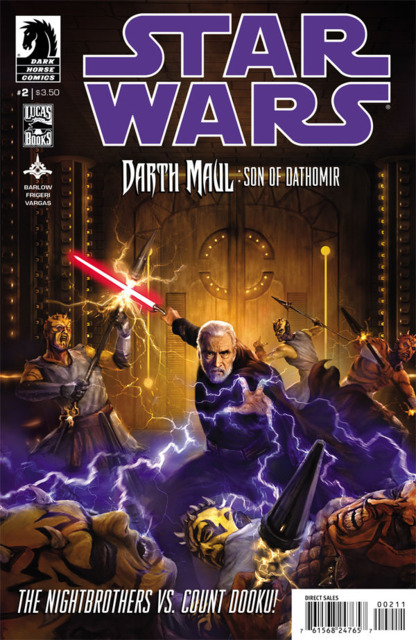